Lay participation: The role of the Diocesan review board

by the Fr Thomas Ferguson

Almost immediately after reports of Theodore McCarrick’s misconduct were published in the summer of 2018, to be quickly followed by a Pennsylvania Grand Jury report on clerical sexual abuse and its mismanagement by local bishops, the idea that lay people should be involved in investigating accusations of the sexual abuse of minors by clergy immediately emerged in Catholic and non-Catholic circles alike. While some thought this a novel idea to consider, and others a moral imperative to implement, my initial reaction was, “Actually, we’ve been doing that for the last sixteen years.”

In 2002, the United States Conference of Catholic Bishops, at its meeting in Dallas, Texas, adopted the Charter for the Protection of Children and Young People.  The Dallas Charter requires that all dioceses “have a review board that functions as a confidential consultative body to the bishop.” The Charter further states that “the majority of its members are to be lay persons not in the employ of the diocese.”

To illustrate how this mandate has been implemented in one American diocese, let me describe the experience and practice of the Review Board in the Diocese of Arlington, Virginia, with which I have worked in my capacity as diocesan vicar general.

In Arlington, the Diocesan Review Board is composed of ten members: two priests, five laymen, two laywomen, and one religious sister.  The lay members of the board bring to their work a depth and breadth of education and experience in psychology, law enforcement, legal practice, and pastoral care, including the care of victims of sexual abuse.

Arlington diocesan policy, publicly available on the diocesan Web site, states that, when there is an allegation of sexual abuse by clergy, the following steps are to be taken:

+  The allegation is immediately reported to legal authorities.

+ The diocese cooperates fully with any investigation by law enforcement.

+ The diocese forwards all allegations to the diocesan Victim Assistance Coordinator so that outreach to the alleged victim/survivor can be offered.

+ After a prompt internal initial investigation, and if the allegation meets a preliminary threshold of credibility, the accused cleric is relieved of his assignment and placed on administrative leave. He may not live at a parish or present himself as a priest/deacon while the investigation proceeds.

+ An announcement is published at the parishes, and at any diocesan institution, where the accused cleric has served. The announcement discloses the allegation and requests that anyone with relevant information contact legal authorities and the diocese.

+ When the diocesan investigation is complete, all evidence is considered by the Diocesan Review Board.

+ The Review Board determines whether the allegation is credible and advises the Bishop regarding the accused cleric’s suitability for ministry.

+ No cleric with a credible allegation of sexual abuse against a minor may return to ministry.

+ If an act of child abuse by the accused cleric is admitted or established, the bishop will take appropriate canonical action, up to and including laicization.

I have served as Vicar General of the Diocese of Arlington for nearly three and a half years, and in that time I have witnessed firsthand the variety of contributions the Diocesan Review Board makes to the ministry of the diocesan bishop.  Initially, from 2015 to early 2018, the Diocesan Review Board met, of necessity, only annually, reviewing the audit of the diocese’s Victims Assistance ministry and its program for the protection of children and young people.  Thankfully, allegations of sexual abuse of minors by clergy were rare during those years.

The events of summer and fall of 2018, however, led to an uptick in allegations of the sexual abuse of minors by clergy. As a result, monthly meetings of the Diocesan Review Board have become the norm. These meetings are always held in person, and to ensure the most effective communication within the Review Board, members cannot participate electronically.  The bishop presides at the meetings, with the presence of diocesan staff to assist in presenting cases to the Review Board members.  Meetings last anywhere from ninety minutes to two hours, depending on the number and complexity of cases under review.  The strictest confidentiality is observed on the part of all members, given the sensitivity of the matters being considered.

In my experience, our Diocesan Review Board members know exactly what their role is, and what it is not.  As an advisory or consultative group, the Board does not possess ecclesiastical authority to render decisions or take disciplinary action against clergy.  The Review Board serves the bishop in the effort to determine the credibility of an accusation, so that he, the bishop, may fulfill his responsibility to discipline a member of the clergy if necessary, and to provide for the common good of the faithful, especially the safety and protection of children and young people in this Church.

The Diocesan Review Board determines the credibility of accusations of sexual abuse of a minor by clergy in one of three ways.  At times, the accused himself will admit guilt.  There may also have been a determination of guilt in a civil court.  Absent these, the Diocesan Review Board finds an accusation to be credible if, based upon the available evidence, the allegation is believed to be more likely to be true than not by a majority of Board members. This standard is similar to what is understood as a preponderance of evidence in a civil court.

The members of the Diocesan Review Board are people of great integrity, with a commitment to the truth as well as to the human dignity of all those involved in the difficult cases that come before them.  As a result, their deliberations presume honesty on the part of persons making accusations.  There is also a deep appreciation of the human right of clerics to a good name and reputation.  Reflecting all vocations and states in life in the Church, the members of the Review Board bring the collective wisdom and experience of the whole people of God to their deliberations.

The psychological, legal, and pastoral expertise of the Review Board members is also a great asset in the recommendations they make to the Bishop regarding a cleric’s suitability to return to ministry.  As noted above, no cleric with a credible allegation of sexual abuse against a minor may return to ministry.  With due regard for the rights of all parties in a case, and reflecting as it does all states in life in the Church, the Review Board is collectively poised to know how the common good of the ecclesial community is best served by the recommendation it makes to the bishop.

As I noted at the outset, it’s been commonly said, amidst today’s scandals of clerical sexual abuse, that lay people must be involved in the investigation of abuse allegations. I sincerely hope that those who express this sentiment, both inside and outside the community of the Church, will recognise the value of the contributions being made by the Diocesan Review Boards mandated by the US bishops’ 2002 Charter for the Protection of Children and Young People.

Father Thomas Ferguson is vicar general of the Diocese of Arlington and pastor of Good Shepherd Church in Alexandria, Virginia.  He earned a Ph.D. in Government from the University of Virginia and a J.C.L. in canon law from St. Paul University in Ottawa.  After studies at Mount St Mary’s Seminary in Emmitsburg, Maryland, he was ordained a priest in 1994 and has served in a number of pastoral, tribunal, and chancery assignments.  He is the author of Catholic and American: The Political Theology of John Courtney Murray (1993). 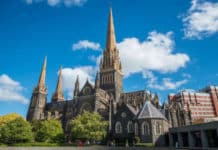