Father William Creede CSsR, one of eight siblings who all pursued religious life, has passed away aged 93.

The last surviving member of the family who produced three priests, four Presentation sisters and one Mercy sister, died at the Redemptorist Community, Kogarah, recently after a short illness.

Incredibly, not only were the siblings rich in vocations, their father William snr was about to enter the Franciscans following the death of his wife when he died and was buried in his habit.

Born in Ireland in 1927, Fr William emigrated to Australia just 18 months later on the good ship Ballarat which brought his mother, two brothers and five sisters to Newcastle where he met his father for the first time, as he had emigrated two years beforehand.

His youngest sister Bernadette was born a few years later.

The family settled in Brisbane, where the two eldest girls, Aina (Sr Mary Clement) and Moira (Sr Canice) joined the Presentation Sisters in Longreach before the family moved to Sydney where Thomas and William Jr joined the Redemptorists, and a third brother became a Vincentian.

Breidha (Sr Christina) joined the Sisters of Mercy at Parramatta, where the Christina Creede Music Centre at Our Lady of Mercy College is named in her honour.

Fr William said his older siblings leaving home to become religious “was the turning point” in his life and admitted that while their vocation sparked a huge interest in following God’s path, a meeting with Redemptorists Fathers Lionel Carroll CSsR and Talty CSsR sealed it. 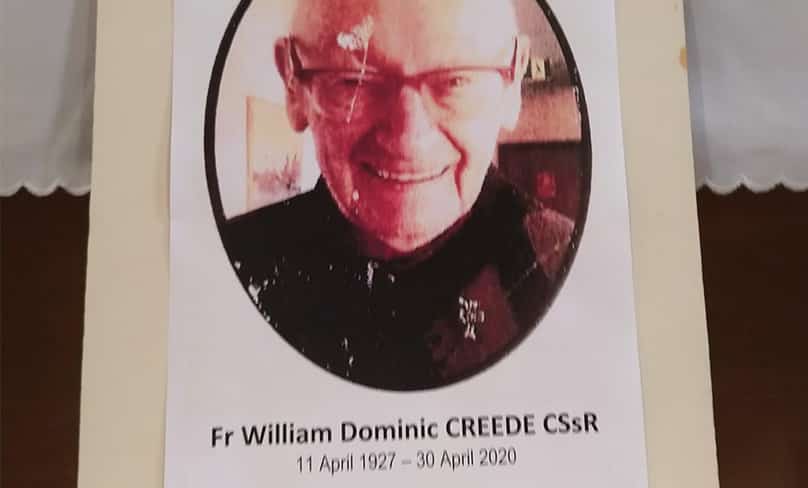 At just eight years of age, a young William had decided his future.

He said his father was very proud to have witnessed all eight of his children entering religious life.

“We said the rosary every night, and we used to say it in Irish sometimes,” Fr William was quoted as saying.

“Daddy was at Mass and Holy Communion every morning.

“The three younger children, Bernadette, Therese and myself, if we were very good through the week our reward was that Mummy would take us back for a second Mass on Sunday.

“That was our reward, and we looked forward to it.

“Fancy saying that to kids today!”

Although saddened at being the last of the children, Fr William was comforted by his family’s extraordinary story and their lifelong commitment to religious life.

In his 68 years professed, he preached well over 500 missions and conducted more than 600 retreats.

As he committed to his order and travelled to missions around the world, Fr William often wrote to his siblings but they rarely reunited.

When Therese died, the three Fr Creedes concelebrated the Requiem Mass and the three Sr Creedes carried the offertory.

In his final years, Fr William often spoke about finding himself without a next generation to carry on the family name in Australia.

“I’m the only one left, it’s a terrible feeling,” he said.

“It’s tragic. I’ve got not a soul out here belonging to me, they are all in Ireland.

“However, all of us are made for eternity. Indeed we will need eternity to thank God for our family, for our parents, our fidelity and our faith.”

A Mass of Christian Burial was celebrated in the Redemptorist Chapel, Kogarah, on 5 May.