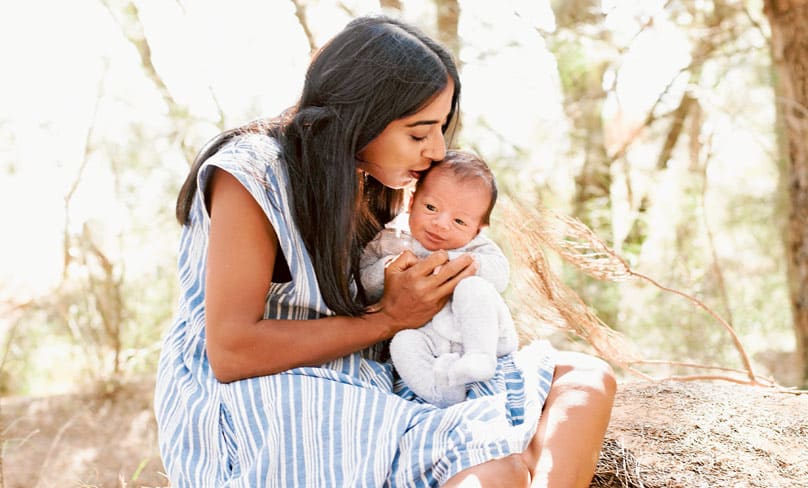 Now just over the halfway mark, it’s a good time to take stock of our Lenten journey.

As Catholic Weekly readers may recall, this Lent I felt drawn to give up make-up. Having worn it every day for the last seventeen years, this was no small decision.

As Lent approached, my unease grew.

On Ash Wednesday I entered the car for the morning school-run and turned to my husband James for some last-minute words of encouragement before facing the world without my habitual armour of make-up. “How do I look?” I asked.

“Hmmm…” He studied my face closely for a few seconds. “You look slightly green,” he offered eventually. “It’s possibly because of your t-shirt.”

It didn’t matter that we were running late (the time I normally spent on putting on make-up had been spent fretting over not wearing it).

I bolted out of the car and into the house, changing my aqua t-shirt for a bright white one instead. Looking “slightly green” is not high on my list of beauty goals.

That inauspicious start has given way to a challenging month. I had thought I would get used to going without make-up.

There was even a small, secret part of me that had hoped it would produce more luminous skin and I would emerge from Lent renowned as a natural beauty and forever freed from the shackles of cosmetic products.

Sadly, no such luck. Although no-one’s run away from me in horror and it hasn’t ended any of my friendships, going bare has been extremely humbling. A stripping back, so-to-speak.

I frequently get the question ‘are you tired?’ from well-meaning friends upon seeing my unadorned face (I no longer can use concealer on my under-eyes to hide a bad night’s sleep).

One friend, a kind soul, went to great pains to tell me how beautiful I looked when she saw me the other day. At first, I was delighted and relieved.

But soon I smelled a rat: she was being too effusive. I have this niggling feeling she was just trying to make me feel better.

But I guess the whole point of a Lenten fast is that it is a sacrifice, something that we are attached to (good or bad) that we give up to draw closer to Jesus as we journey with him over 40 days to the cross.

I certainly feel that happening … a new grace to wake up early and read the daily scriptures and pray a decade whilst the house is quiet.

Despite my best intentions to integrate morning prayer into my day, I love sleep too much so I’ve never achieved this in a regular, consistent way before this Lent.

But most of all I feel a call to humility.

You see, without make-up – and I don’t quite know why – I seem to be less noticed, less affirmed, less appreciated.

And that hasn’t been easy. For someone who’s used to seeking attention and getting it, all this inconspicuousness makes me feel more anxious and unsettled.

Yet I know, when I take these feelings and my Lenten experience to prayer, that this is the way of the cross.

It reminds me of one of my favourite saints Mary Mazzarello (renamed in our house as Mary Mozzarella).

She was a poor, country girl who, not owning an alarm clock, would force herself to wake up in the wee hours of the morning to walk to the village church to ensure she was waiting outside for Mass.

On one occasion she got there at 2am and remained there, waiting in the freezing cold for the opportunity to receive Jesus.

As she matured, she felt called to live the life of a religious, although she was far too poor to join a religious order (in those days you often needed to be cashed-up for that).

Under the guidance of her parish priest, she and a close friend began a little sewing business and they would use their earnings to live out a life of prayer and charity. Mary would offer up every single stitch for Jesus.

Time passed, and Mary had the opportunity to join a group of women led by a lay woman named Angela.

Mary’s holiness led many in the group to think that she should be their leader rather than Angela.

Gossip among some women in the group led to conflict over who was best equipped to be the group’s leader.

This tension emerged despite the fact that neither Angela nor Mary were agitating to be the group’s leader.

The situation eventually erupted and the parish priest (who was the group’s spiritual director) called an urgent meeting of the women.

At the meeting he announced a decision that Mary should go home while Angela remain as leader.

If I had been Mary, I would have had so many emotions. I would have cried. Got angry. Railed against such an unfair decision because I hadn’t done anything wrong and yet I was being punished.

But Mary did none of these things.

She said nothing at the meeting to defend herself. She bowed her head to conceal secret tears.

She went home obeying the direction of the parish priest. Once the situation calmed down, a month later, she was allowed to return.

Mary passed that test of humility and obedience with flying colours. It’s little wonder she was later chosen by God to helm a new order of religious women founded by Saint John Bosco.

She initially pestered the future saint to choose a proper Mother Superior – one who was educated and could read and write properly – but he eventually told her to stop bothering him and trying to second-guess his pick.

Despite feeling completely unworthy of such an honour, Mary led the flourishing Order until her death. Canonised in 1951, she is now revered as a great saint of the Church.

Mary’s story provides a timely example of how to choose to be little. This isn’t easy for me.

As a former Rhodes Scholar, an Associate Professor and someone who loves to name drop her four kids just to get a compliment (‘wow you have four kids, you look so young!’), actually being humble – rather than just pretending to be – is no easy task.

So as I approach the final stretch my challenge is to enter Holy Week with the humility of Mary Mazzarello who not only gave up make-up but offered up her whole life to follow Jesus. Can my exterior sacrifice lead to a deeper interior transformation?