The report combines the national count of Mass attendance, plus data from the National Church Life Survey and the Australian national census of 2016.

It offers data on Mass attendance by age and sex, as well as country of birth and language.

In 1996, around 864,000 people attended Sunday Masses in Australia – 18 per cent of the Australian Catholic population.

But by 2016, Sunday Mass attendance rates across the country had dropped to just 11.8 per cent of all Catholics.

However, the rate of decline has slowed down recently, with only a 0.4 per cent loss of Mass-going Catholics between 2011 and 2016.

The difference between the total Catholic population of Australia and the Mass-going population is clearly visible in the Report’s graphs.

The total Catholic population is normally distributed by age, with most people aged between 40 and 60 years.

However, the Mass-going population is dramatically top-heavy, with most people aged 60 and over, supported on an increasingly narrow ‘stem’ of younger Mass-going Catholics.

The Report notes that “many of these [non-Mass attenders] are associated with Catholic schools, either as parents, teachers, or as students.

Others are employed in Catholic organisations such as hospitals, universities, or social service organisations.”

The Mass attendance rate for both men and women has declined at the same rate. In 1996, only around 14 per cent of Catholic men went to Mass. In 2016 this had fallen to around 9 per cent.

Similarly, women have gone from a Mass attendance rate of around 21 per cent down to around 14 per cent.

The one group of people whose Mass attendance rate has remained constant since 1996 are those born in non-English speaking countries. Their rate of Mass attendance continues to hover around 23 per cent. Meanwhile, Australian-born Catholics sit at around 9 per cent, and overseas-born English-speaking Catholics at around 14 per cent.

The Report covers both the Latin-rite or Western Catholic dioceses, and the smaller eparchies and ordinariates.

In the Western Catholic group of 28 dioceses, the Sunday Mass attendance rate is just 11.2 per cent.

Other groups with high Mass attendance rates are the Maronites (almost 50 per cent) and the Ukrainian Rite (just over 66 per cent).

The numbers of these communities is very small, ranging from a few hundred to less than 20,000.

However, the actual numbers of Catholics attending Mass in ordinariates and eparchies has also risen slightly.

The Mass-attending Catholic population in Australia is ageing significantly. The median age of Mass-goers in 1996 was 45-49 years, but in 2016 it had risen to 63 years.

It is also likely that a contributing factor to declining numbers of Mass attenders is the death of older Mass-going Catholics.

The Report does not provide any data on Indigenous Mass attendance.

Some rural and remote dioceses like Broome and Geraldton show a slightly younger average age of Mass-goers, which the Report suggests is linked to higher numbers of Indigenous Catholics.

However, these dioceses have tiny Mass-going populations. Broome had just 694 Mass-going Catholics in 2016, while Geraldton had just 1,962.

There are also large Filipino, Indian and Asian migrant worker communities in Darwin and Broome which may lower the average age of Mass-goers.

The Report identifies two contributing factors to the decline in Mass attendance. It claims that in the period leading up to 2016, the impact of the Royal Commission “was particularly significant”.

However, this conclusion is not supported by the Report’s data. The largest single decline in Mass attendance rate was between 1996 and 2001 (minus 2.7 per cent).

This may be related to public exposure of historical clergy abuse, particularly in the Archdiocese of Melbourne as Archbishop Pell implemented the Melbourne Response.

The rate of overall loss since 2001 has halved and shows signs of stabilising.

The second factor – that young adult attenders are not being replaced as they age – is supported by the evidence.

The Report also correctly notes that the children of immigrant Catholics tend to assume the views and attitudes of the host population over time, which means that it is possible to predict a slow decline in Mass attendance among these groups in future. 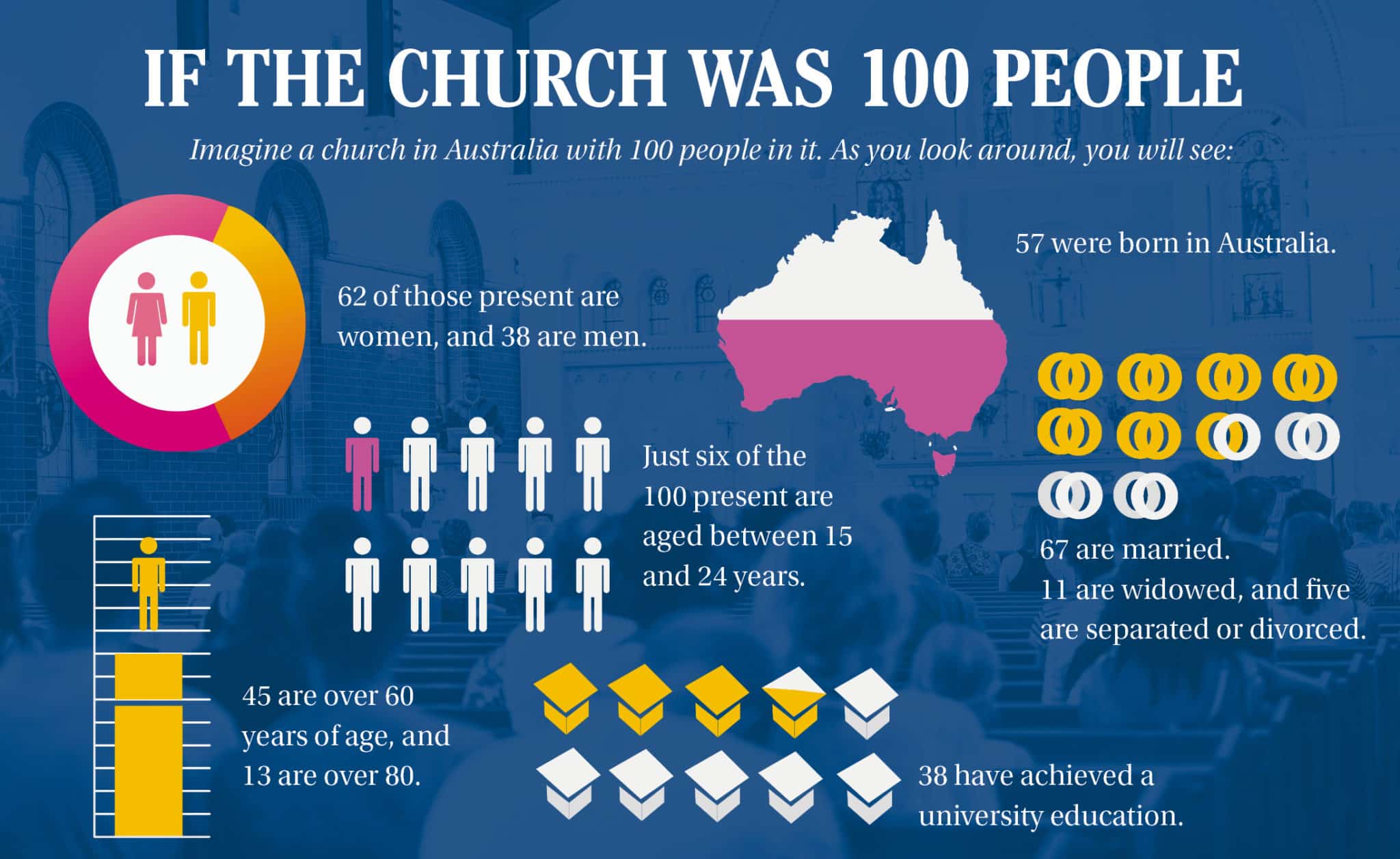 The Report identifies five factors which predict the rate of Mass-going in an individual diocese. They are:

Large Catholic populations tend to be well served with clergy and have many churches available, meaning that Mass is more easily available.

Higher education is associated with urban living, where there are also usually more churches available.

Data from this and earlier reports from the National Centre for Pastoral Research can be used to show which dioceses are performing strongly, and which are struggling to retain Mass-going Catholics.

Those performing best and worst are those with small populations, where a small change in Mass-going numbers can produce a dramatic statistical result.

Darwin and Bunbury are examples where a small amount of migration to the area – young Filipino workers to Darwin, and older Australian adults retiring in Bunbury – has significantly increased the rates of Mass attendance.

Perth – a larger and urbanised diocese with its own campus of the University of Notre Dame Australia – is a more realistic example.

Between 2006 and 2016, there was a net gain of 3.1 per cent in the rate of Mass-going Catholics in Perth, while its total Catholic population rose by 13.3 per cent.

However, for most dioceses in Australia, there has been an average net loss of around 21 per cent of Mass-going Catholics since 2006.

Of the larger dioceses, Brisbane has fared the worst, with a net loss of nearly 19 per cent between 2006 and 2016.

In the same period, the total Catholic population in Brisbane increased by 9.8 per cent.

Parramatta, with a similar sized Mass-going population, has also experienced a net loss of 9.1 per cent while its Catholic population increased by 1.2 per cent.

Meanwhile Sydney and Melbourne have managed to keep net losses to around 10 per cent each.

Both have also experienced almost zero total Catholic population growth over the last ten years, due partly to their highly mobile populations.