According to the movie Love Story, “Love means never having to say you’re sorry.” Typical Hollywood fluff, you might say. Yet the best answer to that asininity was given by a Hollywood all-star, the late, great Charlton Heston. Asked the secret of what would eventually become his 64-year long marriage to Lydia, Chuck Heston replied, “Learning to say five words: ‘I’m sorry, I was wrong.’”

It’s a lesson that seems especially hard to digest these days, at all points along the polarised spectrums of political and ecclesiastical opinion. One gang that finds it impossible to admit error is the Australian Left, which is still conducting a war of calumny against Cardinal George Pell even after his acquittal by Australia’s High Court of spurious charges the Aussie Left may well have had a hand in concocting.

That stubbornness extends to the Catholic subdivision of the Aussie Left, as a recent review in The Australian of the cardinal’s prison diary by Gerard Windsor, a longtime campaigner for Catholic Lite, suggests.

Mr Windsor gracefully admits that, in Prison Journal: Volume I – The Cardinal Makes His Appeal (Ignatius Press), “there is no self-pity, just the assumption that the wrong eventually will be righted, that God knows what he’s doing, and that the suffering involved can be put to fruitful use.” Windsor admires the cardinal’s heroic resolve in jail, which he rightly attributes to the depth of George Pell’s faith. 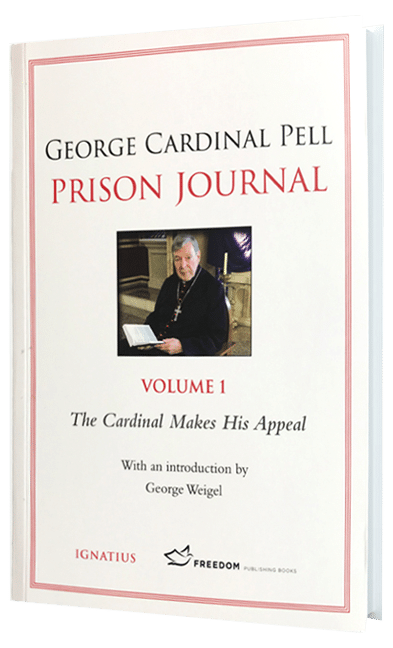 The first volume of what will be a multi-volume work centres on the cardinal’s hope, eventually frustrated, for vindication by a state appellate court; Mr Windsor seems to have shared that hope, for he notes that he was one of two people not “on the conservative wavelength” whose supportive letter the cardinal discusses in his diary.

Full marks, then, to Gerard Windsor for discerning what he describes in his review as a “miscarriage of justice.” We can assume that Mr Windsor was pleased when justice was finally done and the Australian High Court did what that state appellate court inexplicably failed to do, given the emptiness of the prosecution’s case against the cardinal: quash the trial court’s guilty verdict, effectively reprimand the trial jury and the majority of the appellate court, and enter a verdict of acquittal.

But then (to riff on Love Story), the maxim “Being Left means never having to say you’re sorry” kicks in, and Mr Windsor’s review skids off the road into a rant about Pell the “warrior Prince” who continues to “wage war” from jail.

That war is fought against the “militant secularists” the cardinal believes conspired against him, and “against his fellow Catholics:” an ecclesiastical vendetta conducted, according to Mr. Windsor, “with even greater determination.” Windsor is thus offended by the cardinal’s description of the Catholic Lite Brigade as “the bland leading the bland,” which Windsor regards as a “vacuous slur” from “the mike-hogging uncle in the family.”

Australian public life is a contact sport, and it ill behooves Mr. Windsor (evidently an eager entrant in the Epithet Derby) to complain when Cardinal Pell speaks his mind robustly, as he was and is wont to do. That, Mr Windsor says, makes “liberal Catholics squirm.” But isn’t that Catholic Lite squirming a form of surrender to the shibboleths of the secular Left and its culture of lifestyle libertinism?

“there is no self-pity, just the assumption that the wrong eventually will be righted, that God knows what he’s doing, and that the suffering involved can be put to fruitful use.”

There are honorable exceptions, of course, but “liberal Catholics” have been notably absent in Australia (and elsewhere) from the battle against the Left’s determination to establish, with the force of law, what amounts to a new religion: the religion of the Self, in which the human person is reduced to a bundle of morally equivalent desires, the satisfaction of which is the primary function of government.

That ersatz religion – which underwrites everything from the abortion license to legalised euthanasia and physician assisted suicide to the LGBT political agenda – will eventually settle for nothing less than criminalising the biblical and Christian idea of the human person. Indeed, that effort is already underway in the Australian state of Victoria (where Cardinal Pell was maliciously prosecuted) and it’s implicit in the Biden administration’s promotion of gender ideology and the Newspeak-redolent “Equality Act.”

Mr Windsor admits that “secular animosity” toward the Church and the Catholic idea of what makes for human flourishing “does exist.” But he doesn’t seem to grasp the virulence embedded in that animosity or the need for courageous bishops to fight it. One wonders if that blind spot is a result of too much squirming about truth-telling, and too little willingness to reconsider and then say, “I’m sorry, I was wrong.”