To win 1 of 10 copies of The Boy Who Became Santa Claus, LIKE the Catholic Archdiocese of Sydney Facebook page and send your name, email and postal address to [email protected]  Good Luck!

Paul Stevens’ career has taken him all the way from barbells to Bibles.

During his 11 year career in the NRL, the St George and Cronulla stalwart said he went from being a league bad boy in the sinbin both on and off the field to becoming known as part of the code’s “God Squad”, a group of dedicated Christian players who would gather before training and game days to pray.

At the end of his playing career, Paul became team Chaplain of the Sharks and pioneered a weekly, faith-based discussion group with team players, which was successful in winning others to faith.

Today his faith has become so important to him he has written a book about the true story of Santa Claus, to teach children and their parents the real-life story of the origins of Christmas traditions like hanging stockings and stars and lights on a Christmas tree.

The former Marist College Kogarah student said once he discovered the amazing true story behind Santa Claus including the journey of his faith and good works, he had to share it to help put Christ and Mass back into Christ-mas.

“Nick’s story will impact Catholics who in the past have avoided Santa,” he said.

“They’ll be encouraged to embrace him as one of the best real-life examples of their faith and an amazing role model for their child.

“The book explores Santa’s appointment as the Bishop of Myra and his involvement in writing the famous Nicene Creed. It’s amazing to find out that Santa helped to write a well-known statement on our faith, which lead to the Bible being formed.

“I had a rough childhood, so I’m passionate about letting children everywhere know how special they are. I’d like to inspire them through this story to do something great with their life, to believe they too can make a difference, just like Nicholas.”

Paul’s strong faith stemmed from his mother Mary, who raised four children on her own as a single parent after his father left the family home.

He said his mum worked tirelessly to not only feed their stomachs but also their faith.

“Mum worked three jobs to put food on the table and she wanted us to have the best in life,’’ he said. 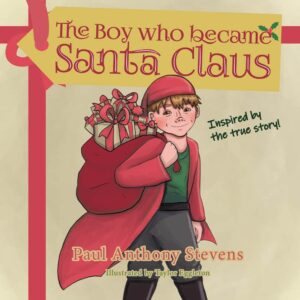 “She was and is a very committed Catholic and would go to Mass every morning before going to work.

“She showed us how important having faith was.

“And God doesn’t want us to sit on the sidelines, he wants us all to get out there and live the faith everyday.”

Paul admits he got caught up in all the trappings of a successful rugby league career but it didn’t take him long to realise that while he had fame and fortune he didn’t have happiness.

He said he spent years looking for what he already had … faith.

“I guess I just lost my way, I had what I call the unholy trinity … females, footy and finances yet I still felt empty,” he said.

“I had been on tv, I was signing autographs and playing in front of big crowds but in all honesty none of it made me really happy.

“And then I discovered Jesus and my life changed. For the first time in a long while I was happy, I found out what I was meant to be doing.

“Today I trust God to look after me and that is exactly what’s happened.”