Created and run by family man and father of three, Andre Abouharb, Catholic Apparel designs and produces “apparel that we can wear that reminds us and the world of our Catholic values.” It features hoodies, shirts, hats and more for adults and children alike that feature Saints and other religious artwork.

“We need to support each other, Catholics supporting Catholics,” said Andre. “I was inspired by different charities that existed and so I wanted to join a new evangelization movement.

Andre was born and raised in Sydney’s south west by Peter and Mary Abouharb. The youngest of 5 boys in a strong Maronite Catholic family, Andre says they never missed church on a Sunday, and their faith lived strong throughout their community.

“On the street I grew up on, we were all Maronite’s,” says Andre. “There was about 10 homes on the street and we all grew up together. The families had 30 or 40 years of living on the same street together.

“There was a tight connection. I called those guys my brothers and I still call them my brothers.”

Andre’s life and his journey to creating Catholic Apparel has been a story of overcoming personal struggle, relying on the grace of God to get through, he has been fueled by personal struggles and seeing a need to step up to defend Catholic values in Sydney and broader Australia.

When Andre was 21-years-old he suffered a serious injury which left his foot severely damaged. Doctors told him that he would never walk on it again and it would need to be amputated.

“They said you’re never going to walk on that foot again,” said Andre. “It will be like a wooden leg. It was charcoal black and there was no pulse in the leg.

“My mother went in to prayer mode and she made a promise to our lady that if my son gets through this she will walk on her knees to the grotto at Our Lady of Lourdes in Earlwood.

“5 days later, no doubt due to my mother’s prayers and the intervention of Our Lady, the pulse returned to my leg.”

Though he does sometimes have health issue related to his injury, Andre’s leg was saved thanks to the intervention of Mary, and he has been forever grateful.

It was at Our Lady of Lourdes in Earlwood that Andre met his wife Sarah, now raising a family together and sharing their faith with their children eight-year-old Peter, six-year-old Claudette 6 and their youngest, four-year-old Charbel.

“We have six children,” says Andre. “Three here on earth and three in Heaven with God due to miscarriage.

“My story is one of a series of events over time which have allowed me to grow deeper and deeper in love with Christ.”

It was during the 2017 debate and plebiscite on marriage that Catholic Apparel started to take shape, when Andre noticed the way some people and organisations used clothing in their activism.

““One day in the office we were asked to wear purple in support of marriage equality, and I began to think – If they’re going to wear it purple, why can’t we wear it Catholic?

“I thought to myself, this Catholic Apparel thing can be the opportunity, I can start making streetwear for youth to wear and to be proud of their faith. Looking good and evangelising through what they wear.

Now not only am I able to create clothing for people to wear but I’m able to raise money for different charities.

“It was never about making money, it was about giving back to the church”

“It was never about making money, it was about giving back to the church” 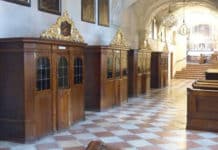 I Went to Confession