For nine members of Sydney-based charity, Queen of the Most Holy Rosary Association (QMHR), a visit at the tomb of St Teresa of Kolkata was just the beginning of an awe-inspiring journey.

Loris Turk, an accountant from Greenacre, said that they were inspired by St Mother Teresa (Missionaries of Charity founder) and Fr Ho Lung (Missionaries of the Poor founder), whose missions of service have spread all over the world.

“We have been blessed, humbled and honoured to be given the opportunity to go and serve at their apostolates,” said Ms Turk.

The first week in Kolkata saw the Sydneysiders volunteering for seven hours a day at three out of the seven homes run by the Missionaries of Charity.

At Kalighat, Mother Teresa’s first home that was opened for the dying and destitute, volunteers helped with feeding the 80 residents, washing dishes and laundry.

“It’s an emotional experience volunteering in this home and witnessing how some have lost hope,” said Ms Turk.

“But it was also an uplifting experience knowing they have the chance to die with dignity and love.”

The next house visited called Shishu Bahvan takes care of children from birth to 12 years who are both mentally and physically challenged and newborn babies whose families cannot afford care.

Helping to feed, dress and entertain 25 handicapped children with their cheeky smiles, it did not take long for the missionaries to grow attached.

The final experience with the Missionaries of Charity was at Shanti Dan, a house for both woman and teenage girls who have moderate to severe disabilities.

The main work was assisting the staff with daily chores, which provided an insight into the amazing people that devote their time and love for these women in need.

“We were able to interact with the Marcys (staff) through these chores which resulted in singing and dancing in the pools of water. It made menial tasks extremely fun,” said Aurora Doueihy, an early-years educator from Bankstown.

“There were volunteers from many countries who were there to share the load and each one would choose a song in their native tongue to sing and teach one another.”

After travelling to Warangal in Southern India, the volunteers began their second week with the Missionaries of the Poor community.

It was at their House of Joy, which takes care of 120 residents with mental and physical disabilities that the group assisted with physiotherapy and food preparation.

For Juilette Morched, a HR manager from Sydney’s West, the experience was quite confronting at first and many questioned why the residents were unable to live a healthy life.

“We had so much sympathy for them, but as we got to know them we were able to witness their childlike spirit and innocent souls,” said Ms Morched.

“For something as simple as a hand to hand touch and a little personal attention, we received the most heartfelt smiles and joyful hugs in return.”

The highlight for the group in Warangal was seeing how funds raised by QMHR are used to change the lives of many.

“The most joyous part of the visit was being able to purchase 15 custom-made wheelchairs for the adults and children that needed them,” said Ms Morched.

“It was beautiful to see their contagious smiles as they were seated in them.” 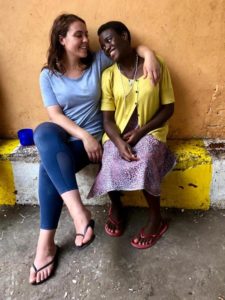 The works of charity with the Missionaries of the Poor continued in the third week of the mission, but this time it was with the community in Nairobi, Kenya.

The MOP brothers in the community take care of 66 children aged five-16 who are severely disabled or otherwise unable to make the 30 minute journey to the local school.

They also employ local teachers to educate the poor children in the community while providing them with school uniforms.

The disabled children require 24/7 care, which is difficult as there is a lack of help available, and so the young Aussie missionaries were put straight to work.

“When we assisted with feeding the children, it could take 20-40 minutes to feed one child as each disability varies,” said Charline Harb, one of the nine volunteers from QMHR.

“These tasks although tedious were incredibly humbling and a great way for us to bond with the residents.”

While in Nairobi, the group met with the Shusho (Grandmas) of the local community and provided them with packs of rice, flour and cooking oil.

In gratitude, the women sang, danced and showered the group with blessings, hugs and kisses.

Just as in Kolkata, the nine women joined the staff in the kitchen to prepare lunch for the residents at the apostolate and more than 150 poor and underprivileged local children.

“We stepped right into the kitchen with the volunteers and joined them in peeling and cutting masses of vegetables and meat. It was a true cultural experience,” said Ms Harb.

“While the meal was being cooked we got the opportunity to spend some time playing with the school children. These children were so joyful and loving. It was so beautiful to see them playing together. There was no feeling of segregation, the children all played together and cared for each other.”

The last week saw the QMHR volunteers travel to Kampala, Uganda, where they joined the Missionaries of the Poor community at their Centre and assisted them with caring for the 110 girls and elderly women with mental and physical impairment.

For Charline Harb, teaching a girl how to eat with a spoon instead of her hands was a special moment for her.

“She had mastered how to use a spoon and scoop from a bowl, her face was alive with excitement,” she said.

At the Bethlehem Home, where the Brothers house orphaned and abandoned boys, some of the children shared their story on how they came to be in the care of the MOP brothers.

“One particular child named Oscar (16 years of age) told us that he and his family travelled to Uganda from Rwanda some years ago as refugees. Not long after coming to Uganda his entire family passed away in a car accident, said Ms Harb.

“As tragic as this situation is, it was incredible to see the strength and resilience of Oscar and of all the other children.”

After sharing a meal with the MOP Sisters, of which there are 18 in Uganda, the volunteers finished up their Mission with a visit to a not for profit organisation called Teresa’s Ministry.

The organisation, inspired by Saint Teresa of Kolkata and run by lay people, has an orphanage for 25 children under the age of two and another orphanage for children with disabilities who have been abandoned by their parents.

The travellers said they felt that their experience with both religious orders was like working alongside Christ Himself.

“The residents are blessed to have these brothers who dedicate their life everyday to serve them not only physically but spiritually also,” said Loris Turk.

“Through our Blessed Mother Mary, the brothers are able to bring light to those in darkness, hope to those who have nothing, comfort to those who are lonely and a future to children who have been abandoned.”

For Aurora Doueihy, one of the most beautiful parts of this experience was watching each of the women on mission flourish.

“With an open heart the QMHR ladies have allowed the Holy Spirit to work through them for the glory of God.”

Established by a small family who felt a need to help the poor, sick and underprivileged, QMHR was officially registered as an association in 2011.

It has been working closely with the Missionaries of the Poor since 2013 and have organised past missions to their communities in both Jamaica and the Philippines.

To donate to the Queen of the Most Holy Rosary Association sponsorship program, go to qmhr.reachapp.co/sponsorships or to their website at www.qmhr.com.au/