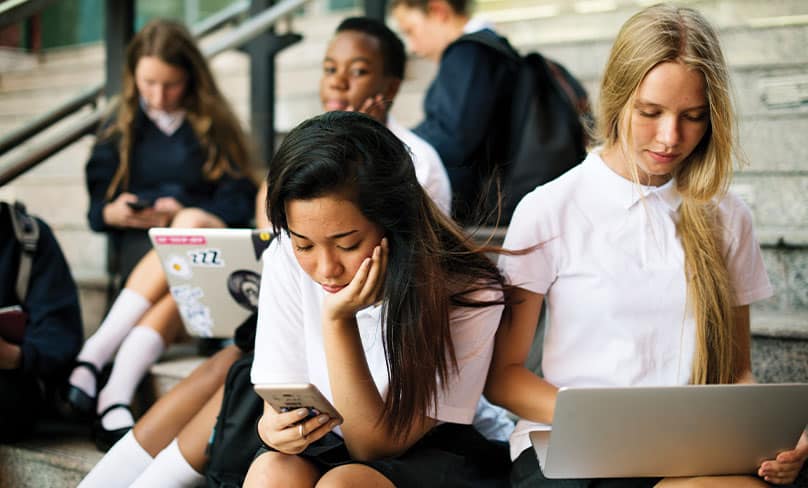 One of the biggest dilemmas for parents and educators today is how to encourage young people to spend less time on their devices and more time having face to face interaction.

As well as the distraction that phones cause, professionals say there is also evidence that constant mobile phone and social media use can cause anxiety and difficulties with attention-span and sleep.

One school that has gone some way to addressing the problem is Domremy College in Five Dock. It says parents are embracing its new phone policy and it has experienced an increase in enrolments because of it.

Rather than having an outright ban on mobile phones at school, the College has put in place a policy which aims to re-educate students on appropriate mobile phone use. Students are permitted to carry their phones with them but between 8.45am and 3.05pm, they must have their phones switched to silent or turned off.

Principal Vivienne Awad said the policy prevents lessons being disturbed by social media notifications and encourages students to “have more physical face to face conversations with each other.”

“Most of our kids were fine, but there was a large handful of kids where it was almost like an addiction,” Ms Awad said.

The College consulted research into the impact of mobile phones on young people, as well as parents, to devise the best policy possible for their students.

“We were finding that the kids needed a bit of fine tuning in that regard,” Ms Awad said. “You’d walk around the playground and a lot of the kids would be on their phones.

“I thought well how do we educate kids to understand when is it an appropriate time to use a phone and when isn’t it?”

A forum was held where parents and students came together and discussed the issue with teaching staff. Guest speaker, Dr Philip Tam, a Child and Adolescent Psychologist, addressed the school community on his research into the impact of mobile phones on teenagers.

To date, the results of the policy have only been positive, Ms Awad said.

“My year co-ordinators have said to me that it’s remarkable just how few phone cyber bullying issues are now being reported to them … in the classrooms, the kids have no pressure,’’ she said.

“I got the best letter from a Year 12 girl who said, ‘I want to say thank you for this but I can’t tell you how more focussed in the class I am because you’ve given me permission not to respond to the phone messages coming through.

“There’s a lot of pressure that’s been taken off kids so they feel they don’t have to respond as soon as a messages come through, it’s quite extraordinary.”

Parent Amanda Gardiner whose two daughters attend Domremy – Alice in Year 9 and Virginia in Year 11 – said the school’s mobile phone policy is a huge support for parents who are trying to limit their kids phone and social media use.

“Personally I think it was a great decision on behalf of the school because it’s very distracting for them to have their phones in class and it helps them to focus on why they’re at school, they’re there to work,” she said.

“They have their Mac Books so they have access to technology so I don’t think they’re missing out at all not having access to their mobile phones. It helps them to focus on their studies and to have less focus on social media because it’s such a consuming thing for teenagers. I can’t find a fault with the policy.”

Dr Tam said research shows that between five and 10 per cent of young people have significant problems with internet overuse and and internet addiction.

“This would equate to many tens of thousands of teens affected, given that about nine in 10 teens have their own mobile phone and access to the web,” Dr Tam said.

Over the past 10 years the rate of young people showing problematic device and internet usage has increased and younger students are increasingly affected.

“They are getting angry with parents, often sleeping poorly and spending unhealthy amounts of time in bedrooms and not engaging in family or outdoor activities.”

He said parents and teachers have a big role to play in helping teens avoid these problems.

“I also believe that there needs to be some form of healthy digital use education at schools, and the curriculum should be modernised to include this very complex part of a holistic education programme.”

Ms Awad said Domremy had made the phone policy part of the enrolment process with prospective parents needing to sign the policy before their children can be accepted into the school.

“It’s now par for the course here, people know and parents have said to us they love this mobile phone policy and that it was one of the reasons that drew them here because they subscribe to it.”

“If kids in the classroom are much more focused on their work and they’re paying more attention, I’d say that in the future we will probably see that it will have a positive impact on our results.

“My philosophy is that every school has to struggle with their way of doing things. We engaged stakeholders and we really did think long and hard about what we wanted to do to help our girls. At the end of the day it was, what’s best for their wellbeing and their learning.”