The second day of the Royal Commission’s Catholic “wrap up” hearing was held today in Sydney.  You can read a summary of yesterday’s hearings here.  The Commission today heard from Father Thomas Doyle OP, a US Priest with significant experience in the Church’s handling of child sexual abuse, Dr Michelle Mulvihill, psychologist and former Sister of Mercy, Professor Neil James Ormerod, Professor of Theology at ACU and Father Francis Maloney SDB, Senior Professorial Fellow at College of Divinity, Victoria.

There were some quite challenging criticisms of the Church in today’s testimony, and these will be addressed at the end of the summary.

Father Doyle spoke about his studies and his work as a staff canon lawyer within the Papal Nuncio’s office in Washington DC, including his role in assisting the selection of Bishops.

Father Doyle went into some detail about his first encounter with child sexual abuse and its cover up.  He spoke of local police contacting the office in 1982 to say that a retired Bishop had been caught with a couple of teenage boys, but they would cover it up.  He went on to reoffend.  He also said that they were contacted by another man who said that a Priest rumoured to be a nominee for Bishop had abused his wife’s nephew, and so the nomination was withdrawn.

He explained that the issue came to a head in the mid 1980s, when the Diocese of Lafayette, Louisiana informed them that they had entered into confidential settlements with a number of families, and that another was planning to sue the Diocese.  Father Doyle wrote a report for the Pope, and a Bishop was appointed to investigate the matter, but Father Doyle said the Bishop was only interested in avoiding the scandal.

Working with victims and families

Father Doyle told he had met countless victims, ranging in ages between 10 and 91 years of age.  He said that the biggest learning he has received from survivors is that the Church still does not understand the “profound spiritual damage” done to survivors and their families.  He said that while a lot of Priests and religious try to address the damage individually, there is still a lack of it being addressed on an institutional level.

Father Doyle is also a consultor to the Pontifical Commission for the Protection of Minors.  He said that he does not believe the key issue to be the protection of minors today and tomorrow, because the Church can do that and punish those who fail in this respect.  He said that the more important task was the pastoral care and support and love of the hundreds of thousands who have been violated physically and spiritually over the years.

Father Doyle said that the teaching that the Church as we know it was started by Jesus Christ did not have a basis in Church history, but commented that this teaching caused the Church to be viewed as “sacrosanct,” and the sole way to achieve eternal salvation.  This, he said, encouraged a culture of deference and a need to protect the reputation of the Church and the clergy, which resulted in children being afraid to complain about Priests, parents reluctant to report and judges unwilling to convict.

He also said that while he believed celibacy was not a cause in itself, it is seen as a “higher” call, which means that it functions as another way to set a man apart from the community.

Gratitude to the Commission

Father Doyle expressed his gratitude to the Commission, calling its work unique and historic.

Dr Mulvihill worked solely for the St John of God Brothers between 1998 and 2006, but resigned because of what she described as corruption and systemic abuse.

Prior to ACU, Professor Ormerod was at the Catholic Institute of Sydney, the Centre for Christian Spirituality, and St Paul’s National Seminary.  He said that he found out that his wife, as an adult, was sexually exploited by a Priest.

Father Francis Moloney SDB spoke about his time as the Provincial of the Salesians, a role he took up after his predecessor had a nervous breakdown.  He told the Commission about how he addressed the issue, making sure he met with survivors, and was more aggressive in the elimination of perpetrators and the provision of unconditional support to their victims.

He spoke about the process of removing a Priest from ministry, and said while faculties could be (and were) removed quickly, the process of laicisation was more difficult, because it required the approval of the Vatican, and there was a reluctance to laicise.

All were asked about what they believed the causes of abuse were.

Father Moloney suggested that men with underlying paedophilic tendencies might have unconsciously been attracted to an order with close connection with children.  He also said that the formation on celibacy was poor, because it was taken for granted that a person who wanted to be a Priest wanted to do good in the world.

Professor Ormerod suggested that there was something sexually attractive about vulnerability, which explained the high rates of abuse in the orders focussed on care.

These explanations were vehemently rejected by Dr Mulvhill.  She said the problems were the seeking of power and a misogynistic culture.  She called for compulsory registration of all Church workers, clerical and lay.

Professor Ormerod said that the lowest rate of offending was in the Archdiocese of Adelaide, and suggested the reason could be that Archbishop Leonard Faulkner (who was Archbishop from 1985 to 2001) appointed a pastoral team which included women, instead of an auxiliary Bishop.

He also spoke of the need for ongoing formation and pastoral supervision for clergy, commenting that the Integrity in Ministry document requires this, and it was also confirmed by the Holy See in a statement of conclusions relating to Australia.

At the end of the hearing, Father Moloney and Professor Ormerod spent some time criticising recent developments in seminary formation  Father Moloney said that the seminaries were “closing their doors” and returning to a pre-Vatican II form of clericalism which involved the wearing of soutanes and the use of Latin in the liturgy.  Professor Ormerod commented on a change he saw in students he was teaching, who began to care more about piety than studies.  The seminary formation in Sydney was singled out for specific criticism.

The hearing will continue tomorrow.

Some thoughts from a Catholic perspective

The evidence of Father Thomas Doyle was obviously well received, by those in the room (who audibly cheered him at times), by many on social media and by those watching via the livestream.  I think the most important part of his testimony was him reminding us that our focus should not only be on the protection of children going forward, because the Church has good systems in place for this, but on the care of existing survivors.  He acknowledged that we can be fearful to face the shame and pain of what has occurred to others, preventing us from reaching out.  I think there is a lot of truth in this, and it was an important piece of testimony.

Making sure the data backs up your testimony

Professor Ormerod attributed the low rates of abuse in the Archdiocese of Adelaide to the creation of a pastoral team which included women by Archbishop Faulkner.  While I have no problem with a proper discussion of the role of women in the Church, I think it is helpful to be clear about whether it is relevant to the issue at hand.

In this case, Archbishop Faulkner served between 1985 and 2001.  It seems from the statistics presented by the Commission yesterday that the rates of child abuse fell across the board after this time.  The table below (Table 6 in the Commission’s data report) shows the proportion of Priests who were subject to an allegation of abuse within a given decade: 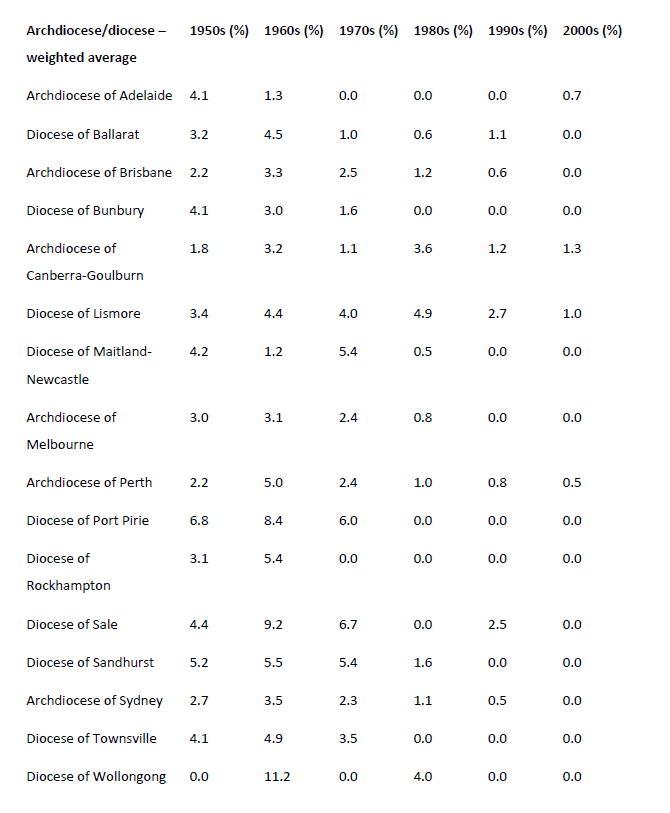 Looking at this table, Adelaide’s numbers were actually higher than the national average.  This points to the fact that there might have been factors other than “women in leadership roles” at play here, and we need to be really careful not to use the data in a way which furthers our own particular hobby horse rather than seeks the truth about the safeguarding of children.

Speaking of hobby horses, we then had the discussion about the seminary, and the return to conservatism, where the witnesses poured criticism on former seminary rectors, Cardinal Pell and the seminarians themselves.

The Church in the late 1960s wanted to make a quantum leap into a new world… and for five or ten years, that happened. There was a radical remodelling and a considerable amount of expense put into restructuring the whole seminary. Sydney is a good case in point. Sydney sat in that magnificent gothic building out at Manly since Cardinal Moran’s time. So they decided, no, let’s get into the city, let’s get into town…  That went well. Things were looking good. But then suddenly in comes another archbishop, and it all got shut down. Back to the old system.

He went on to suggest that this return could put children at risk.

But does anyone who has looked at the statistics on child sexual abuse in the Church really think that we should be returning to the way seminaries were run in the 1960s?  The statistics presented yesterday show clearly the results of the seminary formation which was happening in the 60s and 70s.   Table 4 shows the proportion of Priests whose first ever allegation of child sexual abuse fell within a given decade.  The statistics reveal that the 60s and 70s were not the “glory days.” 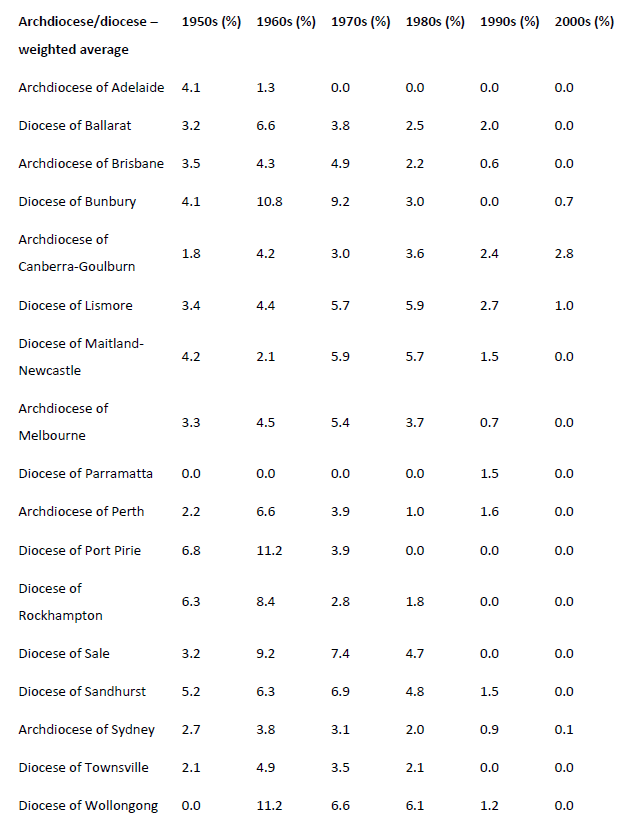 From the data, it seems that whatever Cardinal George Pell and former rector, now- Archbishop Julian Porteous did to “turn back the clock” resulted in a pretty good result for the seminary in Sydney.  The suggestion that the guys coming through now are somehow a greater risk to children than those who were in formation 40 or 50 years ago is not borne out by the facts.  Again, as the Commission continues over the next three weeks, we need to be really careful to discern whether the suggestions made about the best way to protect children are backed up by the facts, and not personal opinions.