The five-yearly Australian Census is an important service conducted by the Australia Bureau of Statistics; enormously rich in data, it provides an evidence base for policy makers and government officials to plan for our future, such as the nature and level of social services that will be required and in what post code. This was certainly the intent of the first Census conducted by the ABS 110 years ago. More recently, some use the data to discern underlying social trends and predict the future of Australian history.

Apparently, the big story in the 2021 data isn’t the concerning drop in the nation’s replacement rate, or the once-in-a-generation shift in living patterns, nor is it the growing number of Australians of non-working age and all the policy and challenges that flow from these developments.

The big takeaway, according to recent media coverage, is the apparent decline and pending disappearance of the Catholic Church from Australian public life – a perennial obsession for the nation’s secularists; in the past, it’s usually the big-ticket holidays (Easter, Christmas) where their portentous predictions get airtime. Now, it’s the release of Census information that fuels this commentary.

A predictable roll call of commentators seize upon a number, such as declining numbers of self-identified Christians and parlay this into a grand arc of analysis which concludes Australia is on the cusp of a post-Christian society (an obvious case of confirmation bias, if ever there was one).

What follows are calls for the Catholic and other Christian churches to be ignored, put on the sideline and relieved of any ‘preferential’ treatment or consideration they might receive, all because the scoreboard shows the game is almost over. Before we accept this curated zeitgeist, we should first question this version of events.

Curiously, the same voices which seek to strip the Church of any rights or alleged benefits it might enjoy due to its falling numbers, are the same who routinely insist that the very latest (self) identified minority group should instantly be loaded up with every protection under existing law, and, if that’s not enough, new laws should be enacted to save tomorrow’s victim from the tyranny of the mainstream.

Christians reserve a special place in their story for the Census. It was practice at the time of Christ’s birth, for the Roman Empire to keep track of the population for tax collections. Caesar Augustus ordered the Census which required Jesus’ parents to travel to Bethlehem, where he was born, fulfilling the prophecy of the coming of the Messiah; for the faithful, a CENSUS is kind of a big deal.

It’s these beginnings, that can refute those who would assess the worth and vitality of the Catholic Church (and Christianity generally) with reference to a head count or a batch of ABS data. The most significant and consequential period of Church history was when it was a single person – Jesus Christ, from the power of one, the world was gifted Christendom.

To anchor the standing of the Catholic Church in an excel spreadsheet and extrapolate a reason for its demise is to ignore the completely opposite approach the Church takes with respect to its many works of charity and outreach.

Yes, the 2021 data shows that Catholicism in Australia decreased to 20 per cent (down from 22.6 per cent in 2016); however, those that wish the Church an early exit should prepare for disappointment. Apart from the technical observations made by demographer Bernard Salt and others who urge caution in analysing the drop in religious affiliation; for example, the percentage of respondents who engaged in the religion question on the Census was unusually high and ahistorical (2.4 million more than the 2016 exercise). 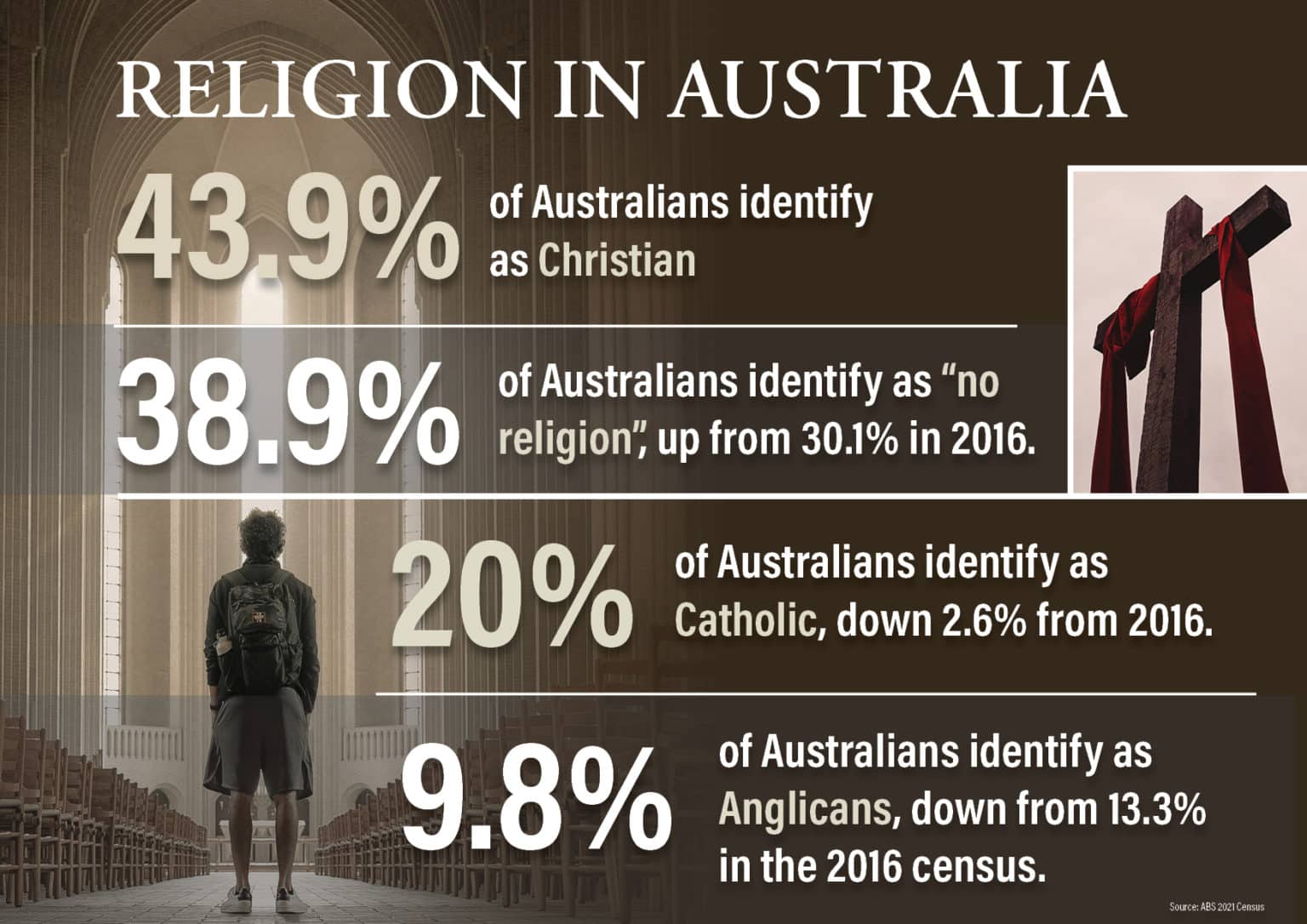 Further, the COVID-induced stop on immigration for the past several years significantly impacted immigrants drawn from Catholic countries. Almost 200 000 migrants to Australia between 2016 and 2021 reported an affiliation with Catholicism and more than a quarter came from one country, the Philippines; these immigrant patterns will soon return to historical averages.

However, the Catholic Church in Australia has never represented its strength by a per capita measurement.

The works of the Church and the gifts of charity, care and education are not reserved for those that profess the faith or tick the right box every five years.

Those that number in the 39 per cent of Australians who marked ‘no religion’ can be found being cared for in wards of St Vincent’s Hospital and the Mater; taught in the lecture halls of Australian Catholic University and Notre Dame, served at the counter in the local St Vincent de Paul store and their children sitting in the classrooms of the local Catholic primary school.

What isn’t understood by the vocal secularists is that it’s not the size of the group with Catholic hearts that matters, rather, it is the size of the heart in any one Catholic, something no ABS statistician can measure.