TO CELEBRATE FATHER’S DAY WE ARE GIVING YOU THE CHANCE TO WIN A 10 PACK OF “DAD TITLES”, JUST SEND YOUR NAME AND CONTACT DETAILS TO [email protected] GOOD LUCK!

Dad-of-two Adrian Beck admits he’s more than a little guilty of telling some pretty terrible Dad jokes and decided to investigate why he did it when even he didn’t think they were funny.

The best-selling Australian author admitted he despaired he had followed in his own father’s  footsteps in telling the type of joke only Dad’s tell and set about finding out why.

And after months of research, could only ascertain that they were quite simply a way to “put a smile on kid’s faces and show them you care”.

“I never thought I would tell Dad jokes … And then when I became a Dad I realised I did it too and didn’t know why.”

He said it was a chance for Dads to come down to their kid’s level and relate if only for a few short minutes.

The author of popular series including Derek Dool, Champion Charlies and the Alien Zoo, who bases his characters on his own experiences at Catholic schools in Tasmania, reckons he’s actually come up with a book about Dad jokes that will have the whole family laughing.

Called Stop the Dad Jokes, he said it’s full of “embarrassing, goofy and not funny jokes” that will leave readers no choice but to laugh.

But more than that, he said his new book provided Dads an opportunity to sit down and read with their kids while having fun together.

“I never thought I would tell Dad jokes, because I would hear my own Dad telling them when I was a kid and remember they just weren’t funny,” he said.

“And then when I became a Dad I realised I did it too and didn’t know why.

“So when I sat down to write a book about being a Dad I thought okay Dad jokes, I need to investigate why we do it and all I came up with is that we just want to put a little smile on our kid’s faces and give them a little joy, it’s as simple as that.

“Even if it’s a groan and not a laugh out loud moment we just want to show them we care.

“She got me into reading Paul Jennings short stories and I became obsessed with reading, I can only thank her for finding the right book for me …”

“It’s the sort of humour you’d never use with friends but when it’s your kids you can be a dag and come down to their level a little and connect with them.

“As a Dad seeing your kids smile really is the best feeling in the world and I guess they are a way of achieving that.”

An advocate for raising childhood literacy levels across the country, he is a fierce supporter of teacher-librarians who encouraged his own love of reading. 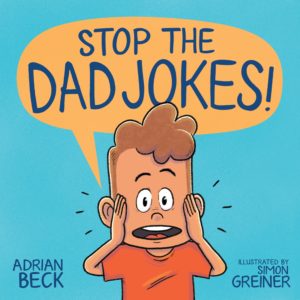 “When I was a boy at Corpus Christi Primary in Bellerive, I went through ups and downs with my reading, but eventually discovered my inner bookworm thanks to our school librarian,” he said.

“She got me into reading Paul Jennings short stories and I  became obsessed with reading, I can only thank her for finding the right book for me at the right time otherwise I don’t know where I would be today.”

As for most Dad’s, this Father’s Day looks a lot quieter this year for Adrian due to lockdown, but he is looking forward to just spending the day at home with his family.

“Traditionally we go out for breakfast for Father’s Day but as we are in lockdown the kids will be in charge of the fry-up (with my supervision) and then the rest of the day we’ll go for a good walk and settle into the couch and watch a fun family movie,” he said.

“However if you are struggling to come up with the perfect Dad’s joke this Father’s Day, I have some suggestions which I can’t guarantee will get a laugh but will certainly get a reaction.

“Here goes, I had to give up gardening because I almost wet my plants.

“As a Dad seeing your kids smile really is the best feeling in the world and I guess they are a way of achieving that.”

“Or this one, I never used to like facial hair but then it grew on me.

“And my all-time favourite ‘Why don’t koala bears get called koalas any more – because they don’t have the koala-fications’.

“At the end of the day, I just hope my new book inspires Dads to sit down and read with their kids, it is such a great way to connect with them and create memories they will keep forever.”