At the Notre Dame University Australia campus in Fremantle, the seed bed of five decades of political controversy, moral misunderstanding and ecclesial division were examined in-depth at a conference entitled: 1968: Five Decades On.

One participant commented: “It is simply amazing what two young men, talking over big ideas in a pub, and their friends can achieve!”

The two men in that pub were Thomas Gourlay and Daniel Matthys,  the founders and organisers of the Dawson Society for Philosophy and Culture begun by them in 2013 (from discussions in a pub) and which has featured not a few striking topics given by notable speakers (often though not always) in the pub setting.

Tom Gourlay, Dawson Society President, shared his thoughts about the resoundingly positive and encouraging responses from the 70 or more participants at the conference and from the keynote speakers themselves. 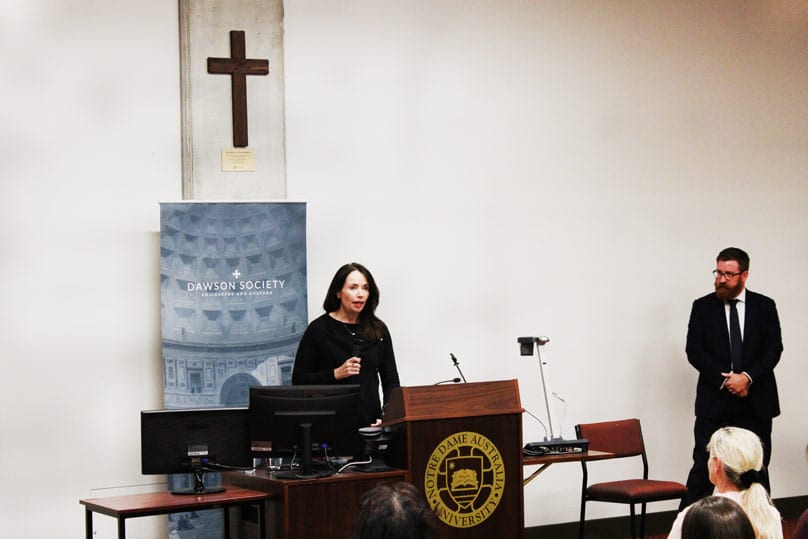 “Well the conference was quite a large undertaking and a step up from our talks.  Despite all the effort it is a real high-water mark for the Dawson society so far,” laughed Tom.

Tom Gourlay is a graduate scholar and practitioner in theology and education, and is currently Manager of Campus Ministry at Notre Dame University Fremantle Campus.

Daniel Matthys is Dawson vice-president and co-founder, who has many intellectual interests and is a teacher at a new and independent Catholic school in Western Australia.

The conference drew some high-profile names and though it involved many volunteer hours by the two men who have young families and many other responsibilities, Tom says he felt blessed and inspired by the event.

Tom explained that the aim of the conference was not to examine the single issue of Pope Paul VI’s encyclical Humanae Vitae in isolation, but to invite speakers to “engage with the events of 1968, in a critical but not simply negative way and to review the emerging cultural influences with new and clear eyes.”

“The conference was the clearest articulation of all that we have set out to do with the Dawson Society. We were overwhelmed by the interest and response.”

The 1968 Conference drew over 30 presenters and five keynote speakers who shone a light on the watershed year of 1968 from a number of different fields and disciplines.

The energy at the conference flowed from the lively discussions between eminent academics and the young and up-and-coming thinkers, all considering the long-wake of the events of 1968 across our own times.  There was a good-willed clarity and accessibility to the presentations which enabled generalists and specialists to converse with ease.

Scott Stephens commented: “I have never been at a conference like this one.” Rather than being negative or disengaged in the face of such vast and epoch changing events, “Here there were hands shooting up … and the audience seems to have an average age of about 35!”

Professor Tracey Rowland reflected on the conference and in her wide-ranging opening presentation which surveyed the emergence in 1968 of a range of social and academic “incubators for anti-Christian ideology” in the West.  The audience that morning lapped up her analysis.  She noted, “the interaction at the conference between people from differing ages and different disciplines was excellent.”

Tom explained the Dawson vision for the event: “We chose the year 1968, because it proved to be a watershed in the way Western culture, and the Church, understood human anthropology… what it means to be a human being.”

“Everything going on in that eventful year, from the Prague Spring, to the university protests, to the sexual revolution, were signs of this crisis point.”

“We were ambitious! We wanted to spark off a conversation between thoughtful people which opened the way to a new diagnosis of our present cultural situation, by looking at that watershed year in ways which were not ideologically closed or fixed”

I asked Tom if he was surprised by the enthusiastic responses of participants at the conference, and the impact and rich variety of the speakers and presentations.

“We knew we had some pretty high calibre speakers with the likes of Fr Giertych attending … but everyone was amazed by the quality of so many of the other presentations as well, particularly from the younger speakers.”

Tom continued, “I was really humbled by the great effort that these speakers gave to their respective papers and by the originality and thoughtful nature of so many of them.”

It is tempting to view cultural, intellectual and political forces unleashed in 1968 into strict divisions of left or right or into opposing barricades. The Dawson Conference presented a more sophisticated consideration of these events.

Theologian Dr Matthew Tan discussed how contemporary society could learn from the cultural critiques of the Frankfurt School, Dr Lawrence Qummou, and compared the ideas of freedom in Catholic Romano Guardini and neo- Marxist, Herbert Marcuse.  Many of the younger scholars re-opened questions about the Catholic response to many of the controversies without bitterness or reproach.

Tom describes the Dawson Society as an “off-the-grid” theological and cultural initiative.  But there is nothing small about its vision.  Its stated aim, echoes the thought of its great namesake, the English historian Christopher Dawson (1889-1970)“a revitalisation of Catholic thought and intellectual engagement within the realms of philosophy, theology and culture” in order to “revitalise Australian culture.”

The Dawson Society has already received offers to publish papers from this event.

There was a largesse and generosity that typified the conference.

Tom Gourlay noted this also.  “Not only did our conference attract Fr Wojciech Giertych, he came to all the sessions and was so generous with his time and personal attention and interest.”

Fr Wojciech’s commanding white-habited figure could be found immersed in each of papers, engaging in the forum or deep in conversation over dinner, listening and thoughtfully responding to young men and women. His presence and considered insights were a highlight of the conference for all.

The “thoughtful conversation” dreamed of by the young blokes in the pub, attracted the confidence and support, not only of some compelling speakers, but also of the two conference sponsors, The University of Notre Dame Australia and the Knights of the Southern Cross.  This support and sponsorship made the “big undertaking” a reality.

This example of inter-generational, extra-mural and inter-disciplinary confidence and generosity augers well for the Dawson’s and for the type of fruitful contribution which faith, imagination and intelligent conversation can bring to our society and Church.