Antonio Colubriale lays claim to something very few people can … saving the Pope’s “sole”.
The Catholic cobbler from Bangor in Sydney’s south made a pair of red slippers for Pope John XXIII, regarded by many as one of the most popular Popes of all time.

Leaving his province of Calabria for a more exciting life in Rome, little did the then 18-year-old Antonio know how much more eventful his life would get.

“I was so nervous I would do something wrong. But straight away he asked if my boss was treating me well and if I was happy working at the Vatican that I started to relax…”

Having learnt the art of boot making from a very young age, he secured a job in a small made-to-measure and repair outlet before completing his compulsory military service and taking a job in The Vatican’s shoe shop. Nuns, priests, bishops, cardinals as well as Swiss Guards and Vatican staff became his regular clientele, however it wasn’t until he got the call from the Papal Office that he realised what an incredible workplace he was in.

Traditionally elaborate, papal slippers were made by hand with red satin, silk and gold thread and featured a cross garnished with rubies.

More than 60 years later, the parishioner at Holy Family parish at Menai remembers the nerves he felt meeting the head of the Catholic Church like it was yesterday.
“I was shaking like a leaf, I was so nervous I didn’t know what to do,” he smiled. “I was given a pair of the Pope’s shoes as a guide and I remember this little old nun kept asking me if she could have a little thread from them to keep.

“I guess it was then that it struck me what an important job I was doing. I was told by the Pope’s office that when I met him I should bend down on my knees, kiss his hand and call him your Holiness. I was so nervous I would do something wrong. But straight away he asked if my boss was treating me well and if I was happy working at the Vatican that I started to relax, I told him I was pretty happy and my boss was good.

“He made me feel so comfortable and at ease, like we had been friends for many years. He had such a good sense of humour, that’s one thing I remember very clearly. He had a corn on his right foot and I remember him laughing saying ‘Roncalli with a calli’.

“Roncalli was his birth surname and calli is corn in Italian, it really was very funny. He was making a joke about himself just to relax us all,” he told The Catholic Weekly. “I spent about 30 minutes measuring his feet before leaving and setting to work to make these very special shoes. They took about a week to make and once completed my boss came and collected the shoes and I never heard another thing about them.”

Not long after Antonio carried out the work for the Pope, he decided to leave the Vatican and set up his own business not far from St Peter’s Square. He said he remembers the weeks before Pope John XXIII passed away he can still hear the cries of people gathering in the square with candles praying.

“Every night I walked through there and crowds of people were always gathered waiting for the latest update on his condition which was conveyed over a loud speaker. And then the night they announced he had passed away on 3 June, 1963, was something that will stay with me forever, people were weeping and crying like children, there was so much emotion, I still get a tear in my eye when I think about it.

“In that short meeting he made me feel like we were long-time friends, so for me it was very sad losing someone I remember so warmly.”

Not long after the Pope’s death, Antonio accepted an invitation by his uncle to visit him in Sydney where he met the love of his life Tina. The pair dated for a couple of months before he returned to Italy to sell his shop and return to Australia and his soon-to-be wife.
He again set up a shoe repair business in Petersham before branching out in property development.

Today he is retired and spends his days with his grandchildren, walking and playing bocce at Liverpool Catholic Club.

‘Blessed’ to know a saint

“It’s funny when my friends at the club found out I had made shoes for the Holy Father they said my good health probably comes from meeting a Pope and being blessed,” he smiled. “And maybe there’s some truth to that.

“To think I have met an actual Saint is pretty special, particularly as I know what a real person he was with such a great sense of humour and humility. Sometimes I find it all a bit hard to believe.”

Pope John XXIII was elected Pope on 28 October, 1958 following the death of Pius XII. During his five-year reign, he convened the Second Vatican Council, the landmark event in the Church of the modern era which restated the Church’s faith for a rapidly changing world.

He appeared to the world as an authentic image of the Good Shepherd. Meek and gentle, resourceful and courageous, he undertook various corporal and spiritual works of mercy, visiting prisoners and the sick and welcoming people of all nations and religions.

Pope Paul VI succeeded John XXIII and discontinued the use of the papal slippers but continued to wear the red outdoor papal shoes, which were later abandoned by Pope John Paul II in favour of cordovan brown leather walking shoes made in his native Poland. 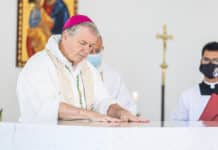