The Plenary Council could be a prophetic voice encouraging a tired, frustrated and apathetic Church, the assembled bishops and member delegates of the Plenary have heard at the second assembly’s opening Mass.

Columba Macbeth-Green OSPPE of Wilcannia-Forbes, who preached the homily at the opening Mass at St Mary MacKillop Place in North Sydney on 3 July, drew on the Prophet Isaiah for an analogy between the Israelites’ exhaustion after their exile and the current state of the Church in Australia.

“There are a lot of people in the Church today who feel tired too,” Bishop Macbeth-Green said.

“There’s been profound changes they’ve seen in the Church and in society.

“They’ve seen what’s dear to them, their faith, seem to dissolve before their eyes in some cases, with emptying churches and everything seemed to be going backwards instead of forwards.

“Many people are tired because they’ve been trying for years to be heard, or to effect change.

“For some, their tiredness has turned into apathy toward the Church and their faith. For others, it’s frustration, it’s anger, even intolerance.

“Our Plenary Council could be, like the prophet Isaiah, a prophetic voice that communicates through the Church comfort, hope and encouragement to a tired people.”

The opening Mass was celebrated on Aboriginal and Torres Strait Islander Sunday, and was replete with First Nations symbols and references to Indigenous spirituality.

The Mass opened with a smoking ceremony and acknowledgement of country by Susan Moylan-Coombs, a Woolwonga and Gurindji woman, who exhorted the members of the Plenary Council to engage with Indigenous spirituality.

“There were circles here where business was done, and today there is now a building that honours a spiritual belief,” she said.

“We are the oldest living culture on the planet. My DNA predates Australia.

“First Nations people are a very proud people and as you have come together and you’re here this evening, to think about the new future and where you’re headed, think about First Nations spirituality on this land that has been here forever.”

Ms Moylan Coombs said her “interaction with the Catholic Church was at birth” because she was removed from her family as part of the Stolen Generations.

“There is much redeeming to be done,” she said.

Ms Frawley-Mangan, who identified herself as a descendent of “those who colonised this land by taking it from their traditional owners, who never surrendered it”, acknowledged “the part the Catholic Church played in the harms suffered by Aboriginal and Torres Strait Island people, and its ignorance of their cultural richness”.

“For these and all wrongs, we say sorry,” she said.

“We know we cannot be fully the Church that Jesus wants us to be, until First Nations people have made their contribution to the life of the Church, and until that contribution has been joyfully received by others within the Church.”

Bishop Macbeth-Green said that Aboriginal and Torres Strait Islander people “could probably really resonate with the people of Israel in a way the rest of us couldn’t” because they too were dispossessed of their land.

The Apostolic Nuncio to Australia, Archbishop Charles Balvo, was principal celebrant of the Mass, and along with the assembled members braved record downpours and wintry weather to attend.

Archbishop Balvo told the congregation that “the Holy Father, Pope Francis, also walks with us”.

“It is he who is inspiring us to walk the synodal way, to take Jesus indeed as our example,” he said. 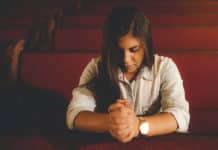 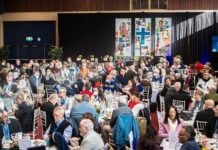 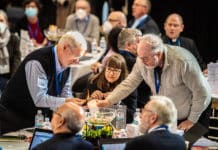