Dialogue, friendship and collaboration between Christians, Jews and Muslims were no longer “optional extras” in a world of fundamentalist theisms and atheisms, Archbishop Anthony Fisher OP told an audience at the Great Synagogue last night.

“The children of Abraham must talk the talk together and then walk that talk together,” the archbishop said during his keynote address at an event to mark the 50th anniversary of Nostra Aetate, the Second Vatican Council’s declaration on Catholic relations with non-Christian religions.

The other keynote was delivered by the Chief Minister of the Great Synagogue, Rabbi Benjamin Elton, to an audience including many eminent persons from Jewish, Catholic and other religious communities, including the Grand Mufti of Australia, Dr Ibrahim Abu Mohammed.

Nostra Aetate contributed to the beginning of a new springtime in relations between Catholics and Jews, renouncing several erroneous beliefs in the Catholic Church and the persecution that many Catholics had brought to bear on Jews over hundreds of years.

While a positive, landmark document, the archbishop said that it also presented a too optimistic belief in progress – that humanity was drawing closer day by day.

Our age had instead been one of martyrs, from the genocide of Armenian Christians in 1915 to the slaughter of six million Jews in the Holocaust, and then on to the contemporary persecution of Muslim sects, Christians and other minorities in the Middle East.

“We all sympathise with Muslim parents and religious leaders struggling with the alienation of some of their young people which makes them prey to radicalisation in hate,” the archbishop said.

“They, too, can suffer from religious vilification in our country. And there’s been a hardening of hearts towards religion amongst dogmatic secularists determined to run all faith and faithful out of the public square.”

Jews, “our big brothers”, had known the evil of religious persecution most often, he said.

“I can echo Nostra Aetate’s insistence on God’s unique and enduring relationship to the Jewish people, its condemnation of all anti-Semitism and its call for ‘mutual understanding and respect’ between Catholics and Jews – as well as with Muslims whom the document recognised also ‘adore the one God, living and subsisting in Himself, merciful and all-powerful, the Creator of heaven and earth’ and take pains to submit to His will.

“I make my own the public apologies for any part Christians have played in prejudiced or hurtful actions towards Jews, Muslims or other believers. I pray for a world in which such prejudice is finally eliminated and commit the Church of Sydney to working for this.”

Religious believers today find themselves caught between fundamentalist theists and fundamentalist atheists, the archbishop said, bringing to mind the observations of Pope Benedict XVI in his Regensburg address.

“Both are totalising ideologies; neither accepts pluralism in faith; both would co-opt state power and in the meantime use vilification to achieve their goals …

“A culture that admits no dialogue between faith and reason impoverishes the human soul, (Benedict said), and resolves divisive antagonisms not by promoting respectful pluralism but by imposing totalitarian homogeneity …

“Jews, Christians, Muslims and other believers, from traditions which emphasise peace, have a role to play in demonstrating that genuine faith is overwhelmingly a force for good and that recalling people to their transcendent origin and destiny actually helps.

“Together they can offer our world the threefold proposal of Nostra Aetate made in the middle of the century of blood: a commitment to mutual respect, indeed friendship, between people of different beliefs; an acknowledgement of the considerable common ground between us, whatever the differences; and a willingness to collaborate on many levels for everyone’s sake.

“Faiths enrich cultures that have lost their moorings on issues as basic as life and love, marriage and family, the dignity of the human person and especially the poor.

Leadership from St John XXIII, Paul VI, and St John Paul II, among others, meant that mainstream Catholics now looked upon Jews “with great affection”, recognising with St Paul “that to Jews ‘belong the sonship, the glory, the covenants, the Torah, the worship, and the promises; to them belong the patriarchs, and of their race, according to the flesh, is the Christ’”.

“My hope and expectation is that our communities will continue to bear witness to faith, hope and love …

“There are 3.8 billion Jewish, Christian and Muslim children of Abraham in our world; if they were consistently to demonstrate their recognition of every human being as an inviolable image and beloved child of God what a difference that would make.”

The full text of the archbishop’s address is available here.

The Epic Battle in Every Marriage 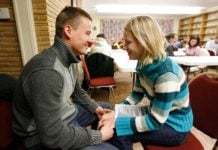