By Adam Wesselinoff and Debbie Cramsie

For the first time in Australian history fewer than half of us identify as Christians, with “no religion” likely to overtake Christianity in the next five years, according to data collected in the 2021 census.

Christianity remains the largest faith, with 43.9 per cent of Australians identifying as Christian. Catholics comprise 20 per cent of the Australian population, down 2.6 per cent from the 2016 census.

Anglicans, the next biggest denomination, declined more rapidly in the last five years, from 13.3 per cent to 9.8 per cent.

“Counter to the general trend, Hinduism and Islam are both growing but remain minority faiths at 2.7 per cent and 3.2 per cent of the population respectively.”

If this trend continues, “no religion” will officially overtake Christianity as the majority “faith” in the 2026 census.

Counter to the general trend, Hinduism and Islam are both growing but remain minority faiths at 2.7 per cent and 3.2 per cent of the population respectively.

New South Wales is the nation’s most Catholic state, at 22.4 per cent, and the least irreligious, with “no religion” topping out at 32.8 per cent.

Tasmanians and South Australians are more irreligious than New South Welshmen, with “no religion” in those states clocking in at 49.6 per cent and 45.3 per cent respectively. 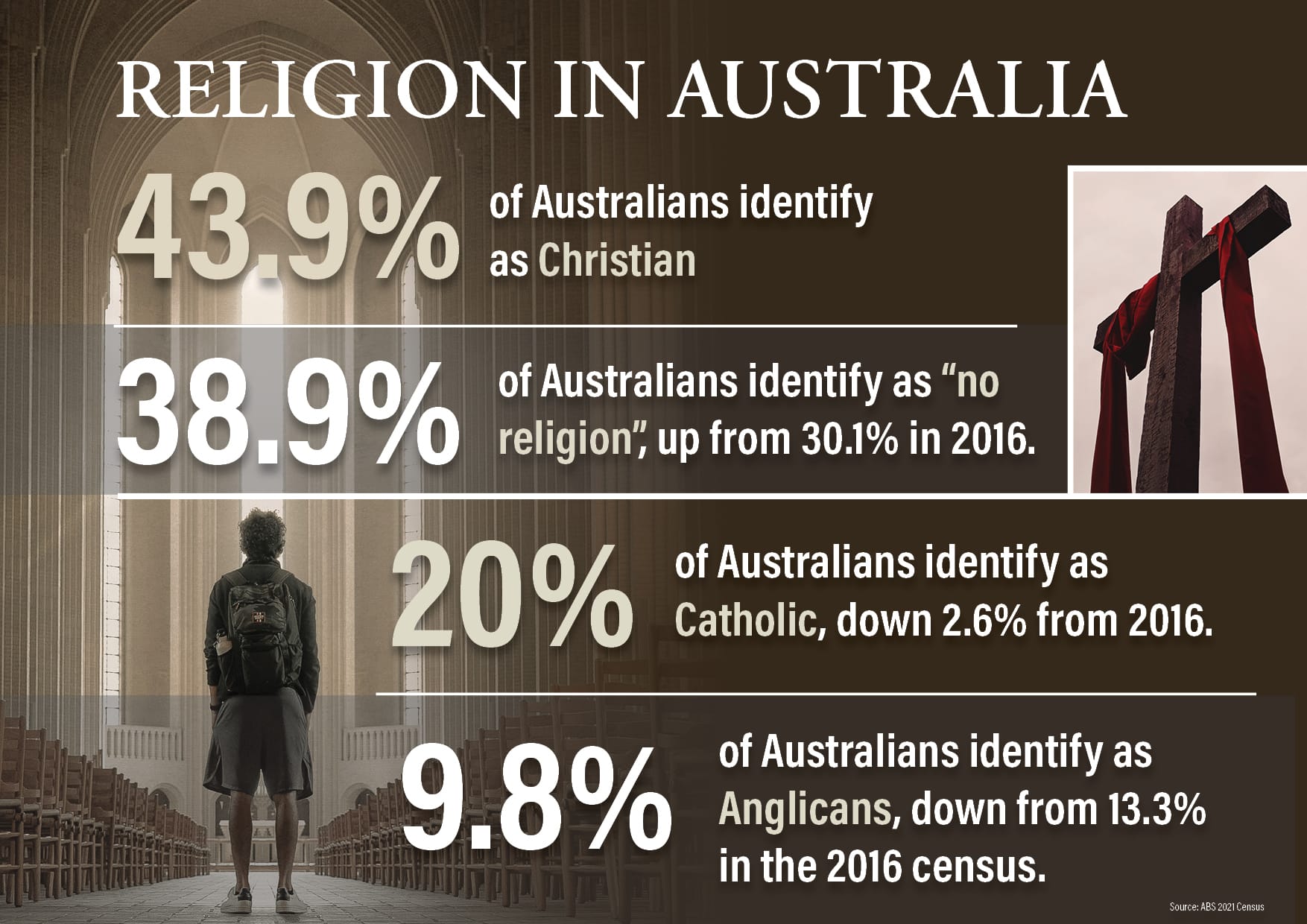 Leading Australian demographer Mark McCrindle said that while Christianity had suffered a “significant drop” it was not all “doom and gloom”.

He said the figures are in line with broader trends and give a more accurate snapshot of faith in Australia today.

“The figures are more a measure of current practice and belief, rather than faith identified in terms of one’s tradition and background like a century ago when Christianity was at 96 per cent,” he said.

“While yes it is a lower number identifying Catholic from 22 per cent to 20 per cent, it’s a more committed, solid number.

“We have evidence to back up this theory with the National Church Life survey which looks at those in Australia who attend Church which has been unchanged now for the last 10 years,” he told The Catholic Weekly.

“We know that the practice of faith is not down, even though the identification with faith is evaporating as people take this question a bit more seriously … And we haven’t even highlighted that the question on religion was the only voluntary one and yet nine out of 10 completed it, without a sense of levity like we have seen in the past with responses like Jedi Knights and the like.

“So overall I think it is a true and authentic snapshot of current and active faith in Australia.”

He said the huge increase in the number of those describing themselves as “no religion” evidences that we are losing the battle for the hearts and minds of upcoming “millennials”.

“For the second census in a row, the number of Catholics has fallen both as a raw number and as a percentage of the Australian population,” he said.

“Unless something dramatic is done, we Catholics and Christians in general, run the risk of becoming an aging and shrinking minority in our own country, putting at further risk our religious freedoms.

“However, we must resist any temptation to fall back into the ‘bunker’ and redouble our efforts to evangelise the culture and emerging generations.

“We have to promote the faith in ways that are faithful, relevant and joyful all at the same time which is not an easy task, but definitely a necessary one.”

National Civic Council President Pat Byrne said that the reduction in religiosity across the country means Christians will need to change tack to protect their rights as they become a minority faith.

NCC polling prior to the federal election showed that “among the irreligious, threats to the religious freedom of others was not regarded as an issue that affected or greatly concerned them”, he said.

“The lack of interest in freedom of religion among the irreligious is of concern given that the respect for human dignity and universal human rights directly flowed from the Christian belief that every human being is created in the image and likeness of God.

“In turn, from this belief, Christians led the way in relief for the poor, building hospitals and schools, and developed the modern social teachings for a just and equitable society.”