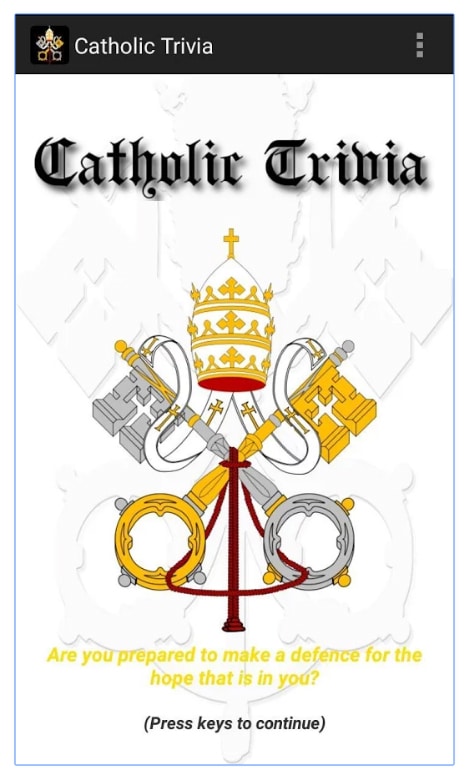 The Dominicans are coming to a Catholic dinner party near you but not in a form you might expect.

The Australian province of the ancient and venerable order has just released a Catholic trivia app for Android phones, and the response so far has been encouraging, with downloads from all over the world, including from China, Brazil and Saudi Arabia. Containing around 1000 questions, the app covers all things Catholic in a diverse range of subject areas: art and literature, history, the Bible, theology, the popes and councils, as well as Catholic customs, liturgy and the saints.

Its five levels of increasing difficulty invite users to work their way from the rank of ‘novice’ (‘Which of these is not one of the four gospels?’) all the way through to an undisclosed, but no doubt illustrious title (‘Which pope published Illustrissimi, a collection of letters to fictional and historical figures?’), offering multiple choice, numeric and pictorial questions, including a few ‘name that artist’ type questions, just for fun.

But the app has a serious motivation too. Its designer and programmer, the recently ordained, Melbourne-based priest Fr Matthew Boland OP, says he hopes it will increase knowledge among Catholics and non-Catholics alike, in addition to testing the most encyclopaedic of Catholic nerds.

The idea for the app was the fruit of the then-seminarian’s private study – a free online course in programming which he undertook in his spare time between studying for ordination and his pastoral commitments.

“We were sitting around at the lunch table trying to think of ideas, thinking of what sort of app we could write,” Fr Matthew told The Catholic Weekly.

“The Android smartphone app market is a large one and we thought that trivia was the best shot we had at creating something unique.”

He and five of his fellow Dominicans set out to come up with the questions, sharing feedback on one another’s ideas and their experience of using the resulting app.

The priest had a playful answer when asked if its authorship would make for a noticeable Dominican bias.

“There may be quite a few questions where ‘Fra Angelico’ or ‘Thomas Aquinas’ is the right answer,” he said, adding in all seriousness that the app had actually been designed with a broad conception of Catholicism in mind.

“The bottom-line hope is that it be catechetical; that people deepen their knowledge. And we hope that non-Catholics might engage with it as well … that people attain a view of what it means to be a Catholic throughout history, and that they have fun while doing it.”

Fr Matthew hopes to soon integrate a leader board in the app so that users can compete against their friends, people interstate and people around the world.

The Catholic Trivia app is free to download and use (search for Catholic Trivia), with the added option of giving a donation to its Dominican developers, if desired.

Fr Matthew says that if the app proves very popular among Android users he may look to create a version for Apple’s App Store.