The latest Federal Budget has met with mixed responses from Catholic organisations, with some slamming it for ignoring Australia’s most disadvantaged citizens and overseas neighbours, while others point out an education silver lining.

Sydney Archdiocesan Justice and Peace Promoter Father Peter Smith said that while the big selling point of the budget was tax cuts, what is really needed is wage increases.

“I think part of the issue for low to middle income earners is that the tax cuts are not compensation for the restriction of wages growth,” he said.

“As the Australian Catholic Bishops Conference has enunciated, we need a wage increase, especially to the minimum wage, or we will continue to widen the gap between rich and poor especially given the generous tax relief to the country’s biggest earners and corporations.”

St Vincent de Paul Society national president Claire Victory said the budget ignored the plight of the most disadvantaged Australians and the two main drivers of poverty; soaring costs of basic housing and below-poverty-level income support payments. Ms Victory said the refusal to address the low level of support for people on Newstart was “harsh” while the budget “offers no solution to putting a roof over the head of the more than 116,000 people experiencing homelessness and those on low incomes suffering severe rental stress”.

However, the council welcomed funding commitments for domestic violence programs and aged care, plus a boost in mental health services, education and support programs for newly-arrived migrants.

Catholic Social Services head Father Frank Brennan SJ also applauded the $500 million boost to the funding for the disability Royal Commission and the commitment to fund domestic violence programs and three social impact investment trials. However he said the allocation of $5m over four years to address Aboriginal youth suicide was “lamentable”.

“Now that the government’s funding package is locked into the Budget, the NCEC looks forward to seeing the detail of Labor’s plans for Catholic schools,” said NCEC executive director Jacinta Collins.

“Without government funding, Catholic schools would only be affordable to wealthy families and hundreds of thousands of students would be forced onto the government school system, which is already stretched.”

Catholic Health Australia summarised the Budget’s effect in the aged care sector as a combination of instituting reforms but with still more to be done to achieve quality, safe and accessible services across the nation. 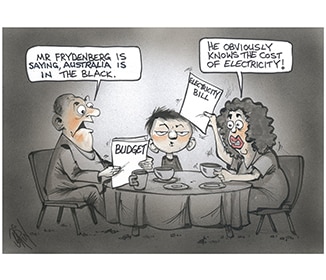 It welcomed reforms which would deliver a comprehensive quality assurance system in both residential and home care sectors, together with moves to address previously announced but unspent packages.

CRA president Sister Monica Cavanagh RSJ said: “For a country with the economic stability and wealth of Australia, cutting aid to developing countries strikes at the heart of a country which prides itself on the ‘fair go’ and on giving a hand up.”

Furthermore, the Export Finance and Insurance Corporation Amendment Bill 2019 which passed Federal Parliament on 3 April will trap developing Pacific countries into further debt by restructuring much of the aid into loans for projects in the Pacific, she said.

“Allocating aid with strings attached is a short-sighted reactionary response that does not take into account the factors that drive the unprecedented movement of peoples seeking refuge,” Sr Monica said. “There appears to be no connection made to the inter-related nature of these global problems.”