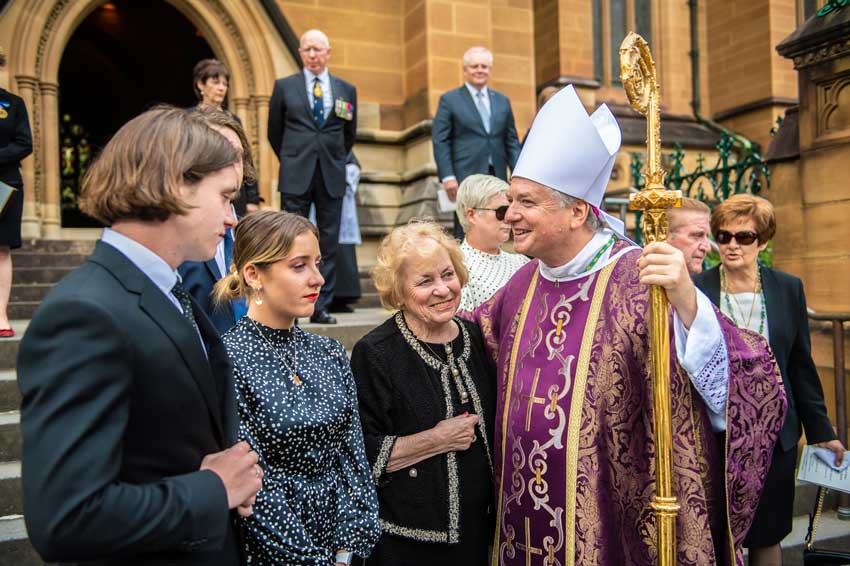 Leader remembered as “truly a man for others”

Former NSW Premier and Australian Catholic University chancellor John Fahey AC has been honoured as a “humble, courageous and principled man” who loved his family and his faith at a state funeral and Pontifical Mass at St Mary’s Cathedral.

Archbishop Anthony Fisher OP celebrated the touching and solemn ceremony which brought together state and federal civic leaders from across political divides, business leaders and his family while many more people participated via live-stream.

Mr Fahey died on 12 September aged 75 after a battle with leukaemia.

Welcoming the mourners, particularly Mr Fahey’s wife Colleen, his surviving children Melanie and Matthew, and grandchildren Campbell and Amber, Archbishop Fisher said Mr Fahey was a “truly great Australian whose passing is mourned by all who knew him or of him”.

In lieu of floral tributes mourners were asked to donate to the Leukaemia Foundation.

“You are our fearless leader, lightbulb changer, huntsman spider killer, the wind in our sails, our commander-in-chief and our compass in all things, especially our faith in God.” – Melanie Fahey-Cicala

Addressing her father in a video message, Melanie Fahey-Cicala who lives in the US and could not attend, shared some of her favourite memories of him including the courage with which he spoke at her sister Tiffany’s funeral after her tragic early death, and the music they both loved.

“You are our fearless leader, lightbulb changer, huntsman spider killer, the wind in our sails, our commander-in-chief and our compass in all things, especially our faith in God,” she said.

NSW Governor Margaret Beazley read a letter of condolence from Prince Charles, which recalled the moment when Mr Fahey helped to save him from an assassination attempt at Darling Harbour in Sydney in 1994.

Former Prime Minister John Howard said Mr Fahey had achieved “something few in Australian politics have achieved … that was to make a full success of participation in both state and federal politics.”

After appointing him as Federal Finance Minister in 1996, Mr Howard found that John Fahey “relished the task and applied himself with enormous diligence”, he said.

“John displayed enormous courage and it’s the character of the man that I remember most,” Mr Howard said, describing him as a man of great decency, intelligence, commitment and “somebody who was respected across the party political divide”.

Federal President of the Liberal Party and also former Premier of New South Wales Nick Greiner paid tribute to Mr Fahey as a man of “such clear values, compassion and broad appeal across all sectors of society”.

“He dealt with princes of the church, princes of the realm just as he did his colleagues, Liberal and Labor, and people of all walks of life,” Mr Greiner said.

He remarked that Mr Fahey, while in his rugby league playing days, would have to have been the only Canterbury-Bankstown player ever to be depicted in the press fending off an opponent while clutching his rosary beads. He also recalled a story about Mr Fahey making sandwiches in a canteen to help cater for a school’s Parents and Friends meeting. “He was truly a man for others,” said Mr Greiner.

As a colleague, Mr Fahey displayed loyalty and commonsense which are “not always easy to be found in the eye of political storms”, he said.

In his homily, Archbishop Fisher said John Fahey was a man of faith for whom “Jesus was his way and truth and life”.

“Amidst the hurly-burly of politics, John had a calm about him explained by his Rosary beads always in his hand or pocket,” Archbishop Fisher OP

“Faith and family carried him through the highs and lows of public life, bereavement and cancer, and inspired his zeal for justice and integrity, his pro-life and pro-underdog stance, and his confidence about Australia’s future,” Archbishop Fisher said.

John Fahey was “never one to check his conscience at the cloakroom before entering parliament or the public square”, he added.

“Amidst the hurly-burly of politics, John had a calm about him explained by his Rosary beads always in his hand or pocket and now on his coffin beside his treasured cross made of wood from Mary MacKillop’s first school.

“But also for his quiet faith as he knelt in this cathedral while fires ravaged NSW, this humble, courageous and principled man who had a soft heart to temper a hard head.”

A restrictions exemption meant that 300 people were able to attend the funeral, who were spaced throughout the large cathedral across three strictly-kept zones to adhere with COVID-19 safety restrictions.

Born in New Zealand in 1945, Mr Fahey based his life upon three pillars of politics, sport, and faith, serving in a variety of senior roles including as Premier of NSW from 1992 to 1995 and the Federal Minister for Finance and Administration from 1996 to 2001. He was appointed Chancellor of ACU in 2014.

Appointed a Companion of the Order of Australia in 2002 for service to those parliaments, last year Pope Francis also awarded him one of the Church’s highest honours, making him a Knight Grand Cross of the Order of St Gregory which Mr Fahey received from Archbishop Fisher at the cathedral.

Also offering words of tribute was Senator Marise Payne who expressed her gratitude for Mr Fahey’s years of mentoring and friendship.

Once a reserve grade player for the Canterbury Bankstown Bulldogs, Mr Fahey later became patron of the club.

An aggressive bout of cancer threatened to fell him in 2001 but he overcame the disease with only one lung, shorter of breath and a renewed determination to contribute as a leader, mentor and campaigner.

He was profoundly affected by the sudden death of his daughter, Tiffany, who was killed in a car accident in 2006. The Faheys raised Tiffany’s two children.

After the funeral Mass, a police escort led the funeral cortege down College Street as the cathedral bells pealed, to a private burial service.