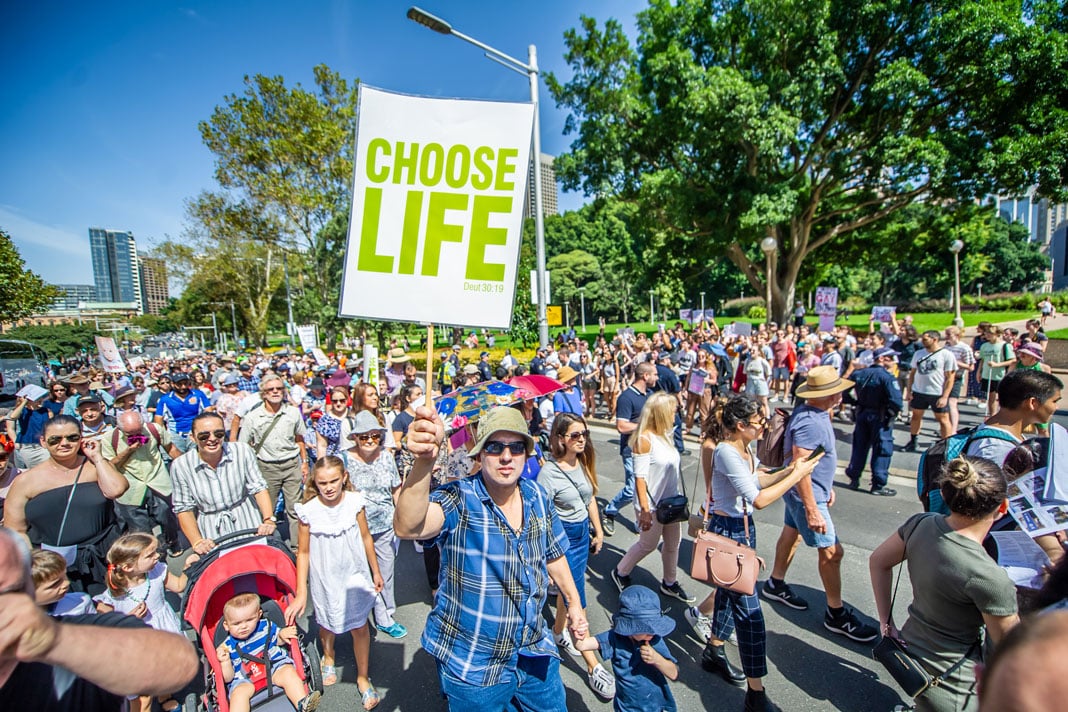 Organisers of the annual Day of the Unborn Child in Sydney say yesterday’s turnout was the best they’ve had in 20 years of running the event.

Paul Hanrahan, Director of Family Life International and organiser of yesterday’s rally, told The Catholic Weekly, he estimated the crowd to be over 3,000 strong throughout the day.

Despite a small group of “pro-choice” protesters in Hyde Park chanting slogans, the pro-life procession, consisting of both young and old, including families with small children, made its way peacefully and prayerfully through the streets of Sydney’s CBD.

“Each and every time a human life is conceived, the child is a reminder of God’s love for his creation and we are reminded of his desire for our eternal life,” Bishop Randazzo said during his homily.

“In the case of the innocent, vulnerable unborn child, our witness may literally save a life,” he reminded the congregation.

Following recitation of the Angelus at 12pm, the procession led by Bishop Randazzo made its way to NSW Parliament House where lawyer Anna Walsh gave the keynote address.

“The truth about the unborn child is that it exists as a unique human being, in time and space, and this truth holds when the child’s life is terminated through an abortion,” Ms Walsh said.

With abortion being decriminalised around the country, she said it can be expected that there will be another push to have NSW follow suit.

“Decriminalising abortion supposedly gives power to the woman and respects her dignity to choose. But the choice she is faced with is to determine the fate of another person, whose life literally depends upon her.”

Ms Walsh offered encouragement to all those wanting to defend life saying, “This is a great time in history to be alive and to be a baptised, confirmed Catholic with the obligation to proclaim truth.”

After continuing down Martin Place, then along Elisabeth Street, the procession eventually made its way back to St Mary’s Cathedral where Benediction was celebrated.

Mr Hanrahan thanked all those involved in the event including police who escorted the procession.

“They do a difficult job under very trying circumstances and with a lot of patience,” he said.

Day of the Unborn Child is a project of Life and Family Institute Pty. Ltd.