Archbishop urges Catholics to participate, help light the fire of evangelisation in Sydney

Scott Hahn, one of the giants of the Catholic faith in the US will be a keynote speaker at the Parish Renewal Conference to be held in Sydney from 19-20 August.

His message will be clear: despite the sometimes-difficult nature of the times for the Church, lay Catholics can – and must – fan the fires of the new evanglisation in their parishes.

Mr Hahn’s talk and the other presentations by expert speakers will help fill out the basic ways that Catholics in Sydney can answer the call of Pope Francis and the popes of the modern era to become a vibrant, positive and inspiring missionary presence in our society. The conference is an initiative of the Archdiocese of Sydney’s Parish Renewal Team, part of the archdiocese’s Centre for Evangelisation and its Go Make Disciples plan for evangelisation.

Archbishop Anthony Fisher OP, who will also speak at the conference, has issued a personal rallying call to Catholics wanting to know how they can participate in the new evangelisation to participate and attend.

“I invite Catholics in Sydney to take advantage of this unique conference and its great line up of speakers such as Scott Hahn to register and participate,” he told The Catholic Weekly.

“As people of faith we are called by Jesus and the Church to be the leaven our society desperately needs. This is a job that we must do together, each in our own ways, in our daily lives and our parishes.

“I am certain that the new evangelisation is not only possible but achievable.

“I ask all of you to join me so that together we can work to renew our parishes and our communities for Jesus and the world.”

Other high-profile speakers include Archbishop Julian Porteous of Hobart, one of the most prominent advocates of the new evangelisation among Australia’s bishops.

Dr Hahn’s exclusive address to the conference participants in livestream will be a highlight; several decades ago he was regarded as one of the most promising anti-Catholic thinkers among evangelical Protestants in the US, many of whom regard the Catholic faith as heresy and an abomination of everything they believe their biblical faith to be.

As an ordained Presbyterian minister, he set out to prove conclusively that Scripture demonstrated the falsity of the Catholic faith and its hierarchical structure. However the more he studied the bible the more his doubts increased. Concerned at what he was discovering both from testing Catholic claims against the bible and his reading of the Church Fathers – the early spiritual and intellectual giants of the Church – he turned to his former lecturers for guidance.

Their inability to answer key questions failed to quell his doubts and – if anything – increased them.

The process led to a crisis of faith for Dr Hahn, which he subsequently set out in his autobiographical account, co-authored with his wife Kimberley, entitled Rome Sweet Home.

It went on to become a global best-seller.

His decision to enter the Catholic Church after having become convinced that it was, in actual fact, the Church personally willed and founded by Jesus, sent a shockwave through the estimated 62-million-strong evangelical Christian community in the US. It deeply shook the couple’s marriage as well.

Kimberley Hahn met her husband when they were students and it was precisely his strong stance against the Catholic faith that had been a factor which impressed her as they began dating.

The shock of her husband’s conversion after several years of marriage almost proved too much as she underwent her own personal crisis.

One of the key factors in the couple’s decision to enter the Catholic Church was their conclusion that contraception – which is either unaddressed or regarded as unproblematic by Protestant denominations – was contrary to the ancient Christian faith. Furthermore, the Catholic Church was the only Christian church tradition that upheld the ancient teaching of contraception as undermining marriage.

Hahn entered the Catholic Church at Easter 1986. His wife Kimberley described him as “Luther in reverse” after Martin Luther, the former Catholic priest whose writings led to the Protestant Reformation.

Kimberley entered the Catholic Church at Easter 1990 after overcoming her questions about the role of Mary in the Catholic faith; for most Protestants, Catholic veneration of Mary is regarded as constituting idolatry, the worship of false gods.

Today, Scott Hahn is a giant of contemporary American Catholicism, especially as a layman, whose writings, talks and lectures are consumed globally. His talk will help inject some of the ‘can-do’ vitality of the US Church into an Australian setting.

Although the Church in the US faces the same serious challenges to Christianity evident throughout affluent societies it is also highly active at every level, from laity and parishes to the hierarchy. Many new initiatives serving the call to evangelisation – from high-rating websites to podcasts and documentaries, mission programs, a substantial core of gifted lay, religious and clerical speakers and writers involved in the public square of US life – continually appear.

Dr Hahn’s significance includes that as a layman he highlights what is often identified as the great missing feature of contemporary Catholic faith: the decisive importance of the lay vocation in the evangelisation of the contemporary world.

In Australia, Catholics have customarily assumed that evangelisation is a work essentially for bishops, priests and religious. Yet in assuming this they have been ignorant that evangelisation has always been a work of the whole Church, 99 per cent of which is made up of laity. Today, huge numbers of baptised Catholics are basically unaware that reception of baptism also confers the responsibility to evangelise, rather than keeping one’s faith hidden in ways that do not touch the lives of friends, family, workmates and society in general.

Nor do they comprehend that evangelisation is meant to be a collaboration on the part of the whole Church – men, women, youth, religious, clergy and bishops – focused on missionary discipleship.

They are often disheartened or confused by a rapidly secularising culture which is also witnessing increasing levels of official hostility to Christian teaching and family life enacted through various state and territory legislative measures. Yet Pope Francis and the recent popes of the last several decades have identified precisely the current state of the world as both a summons and a moment of opportunity for evangelisation to which all Catholics must respond.

The Director of the Archdiocese’s Centre for Evangelisation, Daniel Ang, also said that the post-lockdown present is the time for Catholics to begin the work to which they are called by the Church.

“While many Sydney Catholics have enjoyed online formation initiatives and distinguished speakers over the past two years, we are really looking forward to gathering in person for the first time in a long time to resource parishes for mission,” he said. “The conference is a place where those who want to refocus their parish on calling and forming disciples can gather together, network and receive encouragement and new ideas in their local efforts and passion for their communities. It will do this by examining the original and perennial mission of Christ and how it can be lived in today’s circumstances.

“We’re delighted to have secured Dr Scott Hahn for the conference for an exclusive presentation from the US, as well as our own Archbishop Anthony who will personally unpack his vision for parish renewal across Sydney as shared in Go Make Disciples.

“So, it will be both spiritually nourishing and practical in equipping parish teams and groups, parish pastoral councils, those serving in parish leadership roles or working in collaboration with parishes such as Family Educators with fresh vision and energy for mission”.

Ms Rimac, a member of the Parish Renewal Team assists parishes to run Alpha which introduces people to the fundamentals of Christianity and the Catholic faith. Father Ryan is a member of the Missionaries of God’s Love, a new society of priests dedicated to new forms of missionary presence in Australian life; Fr de Stoop oversees the critical task of forming the archdiocese’s future priests for their roles in parish and missionary life. 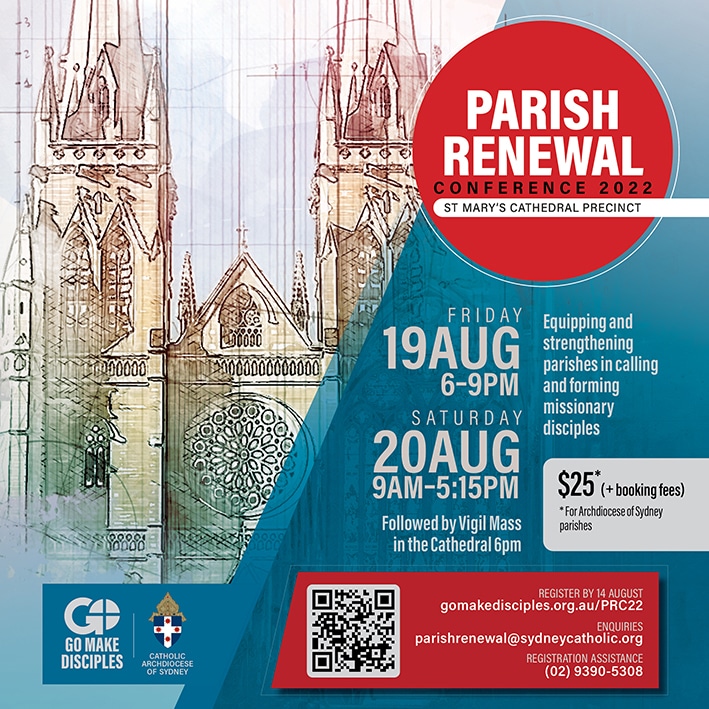 For further information and registration: www.gomakedisciples.org.au