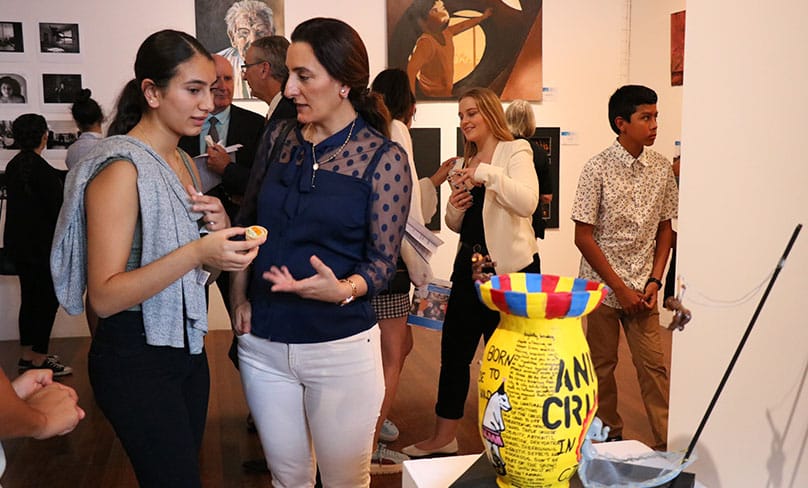 Check out the gallery of all the entries submitted for the 2019 Clancy Awards at the bottom of the article.

A life-changing pilgrimage to WYD2019 has provided the inspiration for Seamus Cronin to take out a major religious art award.

The Year 10 student from Ryde’s Holy Cross College was awarded the prestigious Executive Director’s Award by Dr Dan White, one of the main categories of the Clancy Award.

Named in honour of Cardinal Edward Clancy, the 20th anniversary year marked the third and final use of the theme inspired by Pope Francis’ words: “A little mercy makes the world less cold and more just”.

Open to Year 7 to 12 students of Sydney Catholic Schools, the awards were established to allow young people to express their faith through art.

For Seamus, his composite image of Jesus on the Cross made with more than 3000 tiny photographs taken during his time in Mexico and Panama in January this year, reflected the acts of mercy shown by those on the pilgrimage.

It was one of 73 paintings, drawings, sculptures and mixed media works from 31 schools entered in the competition.

For Seamus, the inspiring artwork represented two of his true passions … faith and photography.

“As soon as I got home from WYD I knew I had to combine both my faith and the experiences at WYD and what better way to do that than with the beautiful photos I took while I was away,” he said. 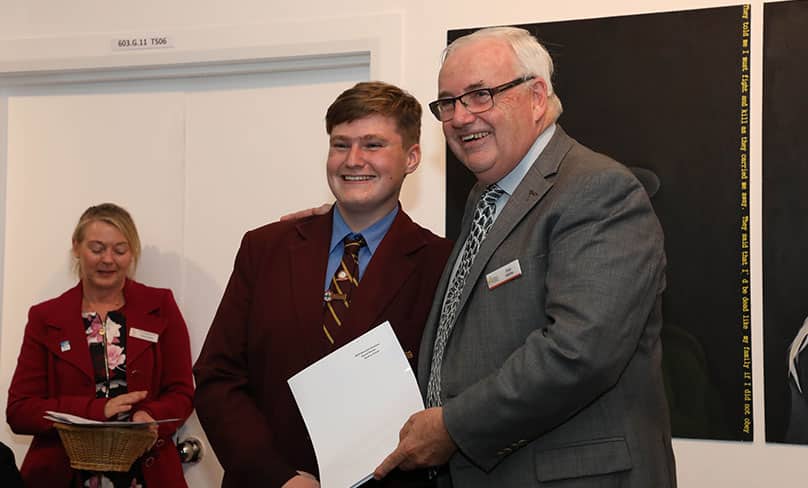 “Meeting other young Catholics from around the world was so very powerful … a life-changing event and something I’ll never forget.

“When I returned home it seemed I had a clear plan for the artwork I was going to enter.

“I have always had a real love of religious art since I visited The Vatican and the Sistine Chapel a few years ago but this piece just had a life of its own.

“I have been able to show my faith in a contemporary way and I’m so pleased to win this category as it is the last one named in honour of Dr Dan White before he retires.”

The main prize was taken out by Year 12 St Aloysius College Milson’s Point student Patrick McMahon for his work depicting the thoughts of a young man with severe disabilities.

Director of Teaching and Learning at SCS, Genevieve Moss said every year she is constantly astounded by the high quality of entries received for the prestigious awards.

“All students who entered the competition should be highly commended for the quality of the artwork and the teachers commended for supporting the students in bringing out their faith and spirituality through art,” she said.

“The artworks are a true reflection of the ability of our teachers who stretch our students’ creativity to produce artworks as diverse as the next.

“We are very proud of the artworks that have been produced inspired by their faith.”

The artworks will be on display at the Australian Catholic University’s McGlade Gallery, Strathfield Campus for the next week.