Archbishop Anthony Fisher OP has appealed to NSW MPs to block proposed euthanasia laws expected to be introduced to parliament next week, saying the laws effectively amount to state-sanctioned killing in the state.

Archbishop Fisher was speaking on the popular podcast, This Catholic Life, in an episode which will be aired from Thursday 14 October.

Under the proposed bill, expected to be introduced into parliament by Independent MP Alex Greenwich on 12 October, doctors would be allowed to suggest euthanasia to their patients, as long as information about treatment options and palliative care is also provided.

Mental illness – including a diagnosis of clinical depression – would not prevent a person from accessing euthanasia or assisted suicide.

“This is about homicide. It’s about killing someone and let’s not pretend it’s something else.”

Faith-based aged care facilities that object to euthanasia would still need to allow doctors and nurses on to their premises for every stage of the euthanasia process, including allowing them to enter and kill a patient on site.

Archbishop Fisher has told This Catholic Life, the proposed laws would place doctors in a fundamentally compromised position.

“This is about homicide. It’s about killing someone and let’s not pretend it’s something else”, he explained to podcast host and University of Notre Dame Australia academic, Peter Holmes.

“I think it’s appalling that under the Greenwich bill, doctors will be required once someone has been killed by them or someone else, or by their own hand with the help the doctor gave them- to falsify the death certificate. They won’t be allowed to state that they died by assisted suicide”. 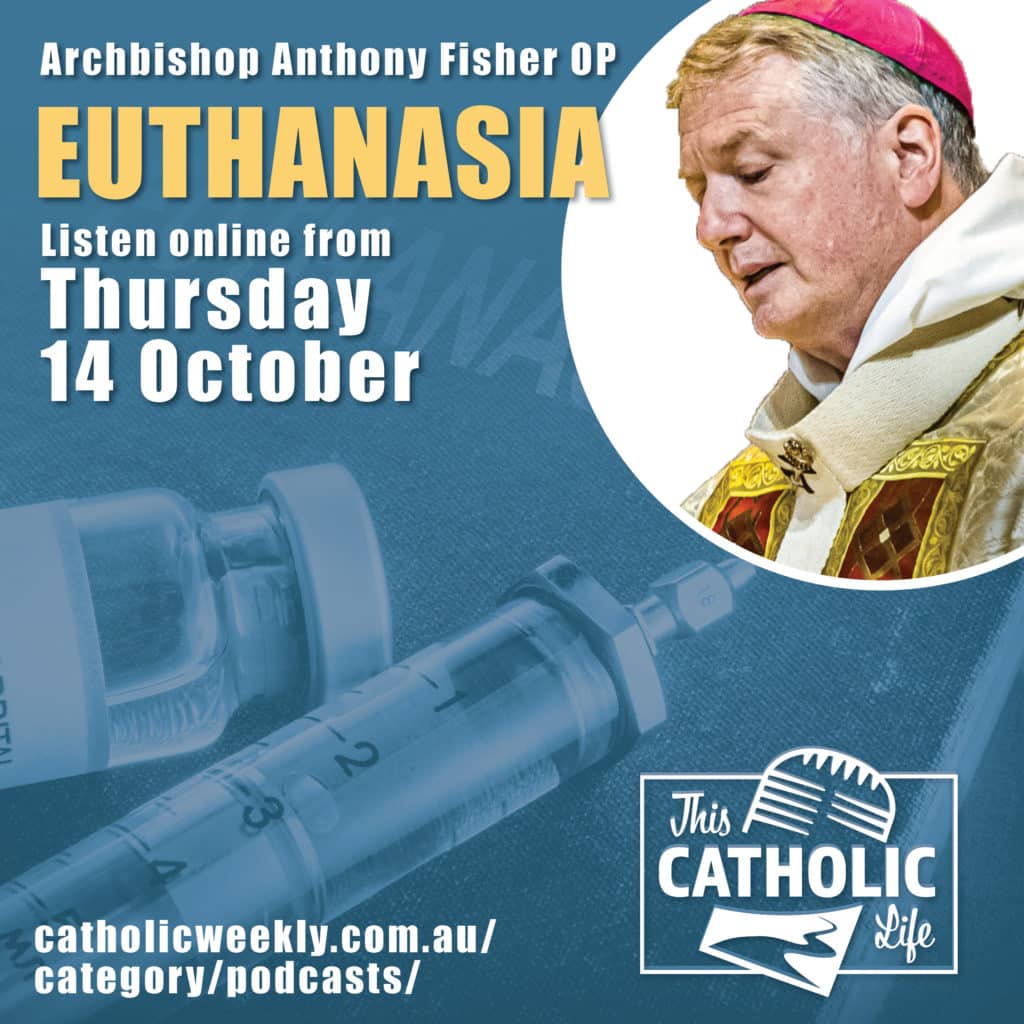 “We know this amounts to killing and it’s effectively abandoning someone rather than healing them. Healing is after all what medicine has been about until now”.

The newly-elected Premier Dominic Perrottet and Opposition Leader Chris Minns have both indicated they will oppose the bill.

Archbishop Fisher said his own battle in overcoming a life threatening illness, Guillain-Barre Syndrome, had left him with a stronger appreciation of the sanctity of human life and why euthanasia must be opposed under all circumstances.

“I’ve been very sick and close to death myself and had to endure a lot of personal pain. But I don’t think that real compassion and real mercy is the same as giving people whatever they say they want or dealing with suffering by getting rid of the suffering person”, he told This Catholic Life.

“I think that real compassion, the hard love, is when we stand by the cross alongside the dying person- like Simon of Cyrene- who tried to bear some of the weight of Jesus’ cross or like Mother Mary, who stood by her son’s cross,” he said.

“… we know that everywhere euthanasia has been introduced, before too long, some people will start arguing that it should be extended to the unconscious, to those under the age of 18 and even to babies.”

“We talk to the person, we pray with them, we weep with them and do our best to help and keep them comfortable and give them love and meaning. But what is unthinkable to us would be to deal with suffering by killing the suffering person”.

Archbishop Fisher said that overseas experience has also shown that euthanasia laws, while initially aimed at only terminally ill adults, are likely to be amended over time to cover children or newborn babies.

“The Greenwich bill says it will have to be entirely voluntary and that it’s only aimed at people who have legal capacity over the age of 18. But we know that everywhere euthanasia has been introduced, before too long, some people will start arguing that it should be extended to the unconscious, to those under the age of 18 and even to babies.

So while we may begin with a bill for the terminally ill, we can’t presume that’s where it’s going to end”.

This Catholic Life podcast, “Euthanasia” with Archbishop Fisher as the guest will go live from Thursday 14 October online here:

Archbishop Fisher has urged Catholics to write directly to their local NSW State MPs, urging them to vote against the proposed laws.