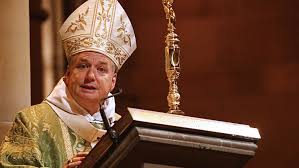 In Rome for the Plenary Session of the Congregation for the Doctrine of the Faith, the Archbishop will also celebrate our national day saying Mass in the chapel at Domus Australia followed by a reception.

Attended by Australians working in the Vatican, diplomats, seminarians, priests, religious sisters and brothers and other Catholics who now call Rome their home, the typically Australian celebration will feature everything from lamingtons to ANZAC biscuits.

The Domus Chapel will be decked out in red, white and blue flowers as well as have the Australian and Aboriginal flags on display.

The Australia Day celebrations are held annually to give those living, working and studying in Rome an opportunity to get together on our national day.

While in the Italian capital, the Archbishop will also attend the week-long meeting at the Plenary Session for the Doctrine of the Faith, which is held every two years and is the oldest among the nine congregations in the Vatican.

Founded by Pope Paul III in 1542, it is tasked with a range of responsibilities, from determining the doctrinal soundness of theological and catechetical works, to advising and giving judgment on matters relating to areas such as medicine and bioethics, to conducting canonical trials in cases of child sex abuse by clergy.

Its headquarters is at the Palace of the Holy Office, just outside Vatican City and employs an advisory board including cardinals, bishops, priests, lay theologians and canon lawyers from around the world.

The current Prefect is Archbishop Luis Ladaria Ferrer SJ, who was appointed by Pope Francis for a five-year term beginning July 2017.