Archbishop Anthony Fisher OP faced some tough questions when he visited kindergarten children at a south Sydney primary school last week, who scrutinised everything from his morning routine to his plans for the weekend and his favourite kind of prayer.

He told the children at St Thomas More Primary School in Brighton-Le-Sands that cereal (typically bran) and coffee is his go-to breakfast, workshopped the idea of a movie night with parish priest Father Manuel Santiago and spoke with them about praying the Rosary.

Archbishop Fisher dropped by several classrooms as part of a four-day visitation of the school and parish led by principal Jennifer Frost and Fr Santiago.

It included the celebration of several Masses, visiting and meeting with parish group leaders and individual parishioners, with leaders, staff, students, and parents of the primary school, Catholic parents from local state schools and others.

“The funniest question was what did he have for breakfast, he said it was bran that tastes like cardboard and he drinks coffee,” said school SRC secretary Clara Cerroni.

“At Year 6 someone asked him what his favourite chess piece is and he said it was the Bishop.”

Mrs Frost said that while it was initially daunting to hear that the archbishop was coming to visit the school, Archbishop Fisher was “absolutely personable”.

“He was so lovely with the children and it was lovely for the parish too,” she said.

“It was a joy to have him in our parish and our school and I don’t know how many other schools can say they have had their archbishop come to visit for four whole days.”

The occasion was the latest canonical visit by Archbishop Fisher to the archdiocese’s parishes and affiliated schools. In March he spent time at St Patrick’s parish and primary school in Kogarah which was holding its 130th-year celebration. 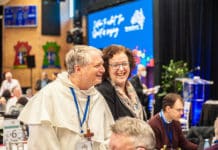 A week of positives and negatives for the Plenary: Archbishop Anthony Fisher