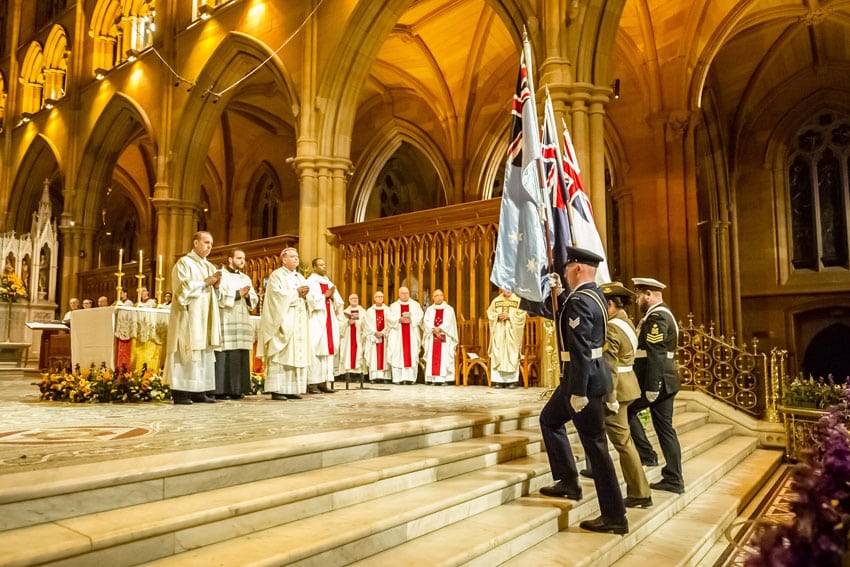 The story of the Anzacs and their last stand on the beach at Gallipoli is a “parable” for the “greatest of true stories,” Archbishop Anthony Fisher OP said during the vigil Mass for Anzac Day at St Mary’s Cathedral.

As dignitaries, veterans and defence force personnel filled the Cathedral on the eve of Anzac Day, Archbishop Fisher reminded them that the sacrifice of the Anzacs is an echo of Christ’s ultimate sacrifice.

“Indeed, the Anzac myth is, in its own way, a retelling of the Christian story, which we celebrated only a few days ago at Easter,” Archbishop Fisher said.

“The Easter story, which Peter and John suggest it reprises, is the narrative in which ‘Life’s own Champion, slain, yet lives to reign,’ the story of all humanity, redeemed through ‘sacrifice and praise.’ So too we remember the Anzacs through death and survival, victory and defeat, living forever in our monuments and hearts.”

Anzac Day was not about “glorifying” or “romantising” war, he said, but rather a day on which we remember, commemorate and “monumentalise” those heroic men and women. The occasion also serves as a warning not to repeat past mistakes or recommit past atrocities, the Archbishop said.

“When we gather here every year, or at a dawn service tomorrow morning, or watch the parade later in the day, we do so not so much to celebrate military prowess, or perseverance, or eventual victory, in that war that was supposed to end all wars—a war that proved to be the cradle for both the Australian and the Turkish nations,” he said. “No, we gather to commemorate the real men and women who fought that war and the ideals they stood for.”

“The Anzac story is a parable for that greatest of true stories, the Anzac legend a retelling of what is more than legend, the story of that Wonder-Counsellor, Mighty-God, Everlasting-Father, Prince-of-Peace, who out of death brought life, out of captivity liberty, out of violence brought peace, out of the folly of the Cross salvation,” Archbishop Fisher said.

“As we pray for eternal life for those who died for the security of our country and for peace in our world, we commit never to glorifying or romanticising war. And we pray that when the hour in which our soul is troubled comes, when heroism is called for, we may be glorified as the Christ was, not by victory by worldly standards, but by that victory that is standing fast to the true and good and beautiful, standing by your mates, family and country.”