Before my conversion I was a proper little pagan.

I lived for my next drink or other sensory experience, for the satisfaction of my baser passions. I cared nothing for other people’s needs and never gave a thought to worshipping God or serving humanity. I didn’t turn my mind to the great mysteries of God, creation and ourselves. I just wanted pleasant experiences and a quick fix to anything unpleasant.

But something pointed me in a different trajectory. It was late in the morning of Sunday 3rd April 1960, in the old church of St Thérèse, Lakemba. Fr Cyril Hatton poured water over my head and said ‘Anthony Colin Joseph, ego te Baptizo in nomine Patris, et Filii, et Spiritus Sancti.’ In a flash the ‘pagan’ was a Christian, the lost soul saved by Christ’s passion and resurrection, the outsider to the Church made part of it forever, the earthly baby given a heavenly identity, mission and destiny.

That was the ‘moment’ of my conversion. I was three weeks old, wearing the christening gown of my great grandfather, grandfather and father, and now sharing in the ‘Faith of our fathers’. It was much more dramatic than being thrown from a horse or deciding at a rally to join Jesus. I went down into a watery tomb with Christ so He could raise me up to new life. On that foundation God, family and friends, parish and school, religious order and diocese, and I, would build, for 58 years so far. But on that day I guess my parents, like those in our Gospel today, wondered what this child would turn out to be…

It was not the end of my conversion. Echoes of the old me survived, and still do today, so that the self-indulgent baby emerges from time to time. The world, the flesh and the devil remain determined to reclaim me. Sydney’s charms, culture and ideologies seek to make me their own. I was a fairly typical Aussie lad and there were forces at play that could have taken me down a very different path. 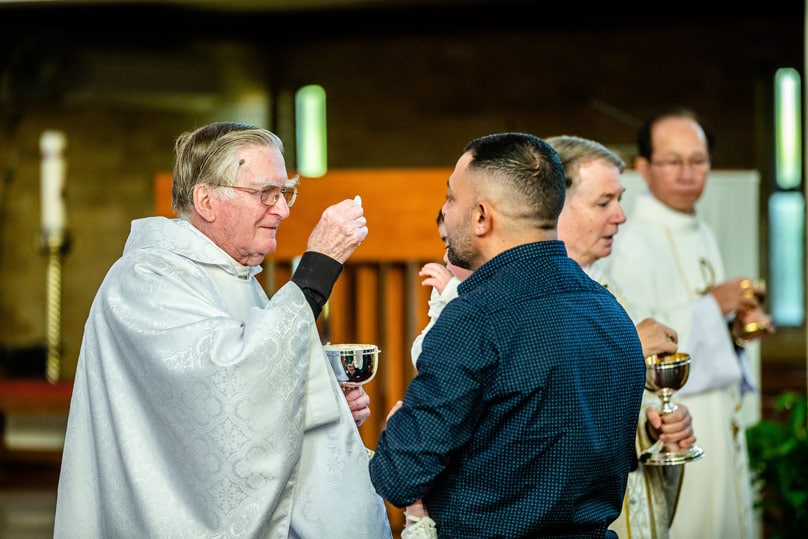 At the same time, the grace of Baptism received in this parish, was also at work in me. In due course it was strengthened by Reconciliation, Eucharist and Confirmation – the ordinary means of conversion after Baptism. Then I received the graces of religious life. And because I’m a glutton for sacraments, I went back three times to receive Holy marching Orders! Each of those were major conversion moments that marked me forever.

You see, each of us has a lifetime in which to be made an icon of Christ or of something less worthy. Life is no rehearsal; we have just one, from conception to death, reborn in Baptism and there promised eternity. There are many pressures and we need divine grace if we are to make progress, even of the three-steps-forward-two-steps-backward kind. Baptism points us in the right direction, but where we go next is up to us.

“The time came for Elizabeth to have her child and she gave birth to a son; and when her relatives and neighbours heard it, they shared her joy” – so we read in today’s Gospel (Lk 1:57-66,80). John the Baptist’s conception and birth closely mirrored Christ’s: both were miraculous, both to women who could not have expected to conceive. Both were born to mothers who experienced the power of the Holy Spirit, and both had confused, bemused, muted fathers. Unexpected names and other portents hinted from the start that something special was on the horizon for humanity.

John and Jesus paralleled each other, also, in lives of austerity, so that both had nowhere of their own to lay their head, until at last it was the executioner’s block. Both preached as the prophets of old, speaking the truth whatever the cost. Both chose celibacy for the sake of God’s kingdom and gave their all, even their life blood. So many were the parallels that many thought John himself was the Messiah, that his voice crying in the wilderness was that of the Servant promised in our first reading (Isa 49:1-6). But John insisted he was not the one; someone greater was coming (Acts 13:22-26).

Every Christian gets their vocation like John at birth, or soon after at the rebirth of Baptism. Yet out of those some are called to be priest and prophet, as John was, called to prepare ‘the way of the Lord’ through the landscape of people’s hearts. John was God’s alarm-clock and his message was confronting. He bound so Jesus might loose; he consigned all to sin, that Jesus might save from sin; he reflected the light of Christ into the dark recesses of men’s hearts, so all might be cleansed. 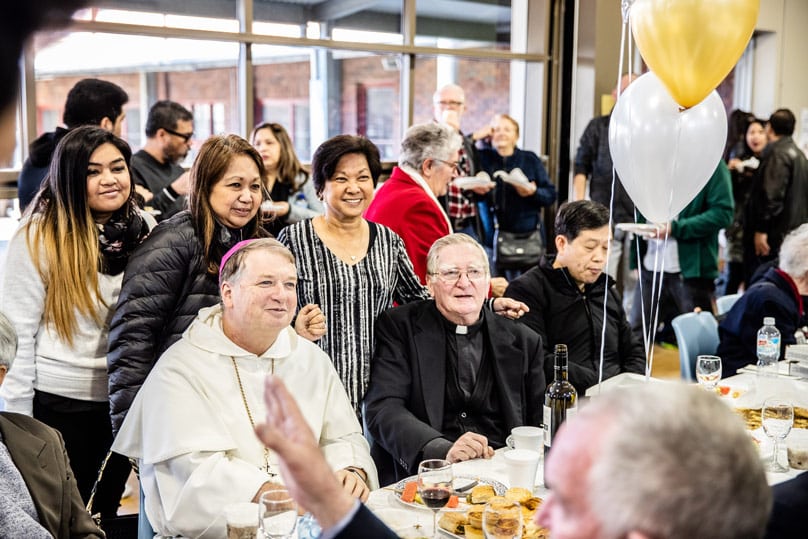 So, too, has Fr Gary Rawson, whom we celebrate today. After ordination by Cardinal Freeman, he served in Maroubra, Lane Cove, Lidcombe, Mosman, Richmond, Naremburn, Kingsgrove, Brighton-le-Sands, Concord, Bossley Park, Beverly Hills and Maroubra Bay. In other words, “he’s been around”. But he finally settled down, here in Lakemba, and for three decades!

There are many sides to the life of a priest. But the celebration of John the Baptist by an archbishop baptised here invites us to reflect on his role as one who ‘christens’. Gary the Baptist hasn’t worn camel-skins, or eaten locusts and honey, or cried out ‘Repent: look who’s coming!’ But, like John, he has pointed to Christ and baptised in the name of God. Most Catholics only see this ritual a few times in their lives and hear little of it over the noise. But priests hear the call to parents and godparents, parish and school, to raise the child in the Faith professed there. And the priest gives voice to those aspirations for our children again and again: the call to be ‘Christened’ – made like Christ – over a lifetime, the invitation whispered at our spiritual rebirth.

At baptism Christian mothers give thanks for the safe delivery – and Christian fathers that they did not have to go through it themselves! But for priests the labour pains begin only after they’ve brought forth the child of God from the font. Saint Paul was expressing as much when he said “I am in travail until Christ be formed in you.” (Gal 4:19) Priests are called ‘father’ because people experience God’s fatherhood when priests baptise, absolve, communicate, marry or anoint, when they teach, visit or bury.

This fatherhood is not about ‘patriarchal power’, but modelled on the Mandatum when Christ washed His disciples’ feet, as if baptising them, and then fed them His very self. The greatest serves the least, the disciple gives up his life to gain it for eternity (Jn 12:23-28), the father spends himself for his family.

Fr Gary’s particular goal, he tells me, has been “to nourish the lives of the Lakemba people in their Catholic faith”. I have absolute confidence he has done this generously and faithfully. A lot has changed here over his three decades of service, as the working-class Anglo-Celt community became a Vietnamese one, then an Arab one, with a variety of others included. It’s the story of Australia told in miniature, as wave after wave have come with their particular spiritual needs, each making their particular contribution. Lakemba has been blessed through such changes to have a reliable father in Gary Rawson, to wash and nourish us. Thanks be to God! Thanks be to Fr Gary.

This is the edited text of Archbishop Anthony Fisher OP’s homily for the Mass for the Nativity of St John the Baptist and farewell for Fr Gary Rawson. Given at the parish of St Therese, Lakemba, on 24 June 2018.