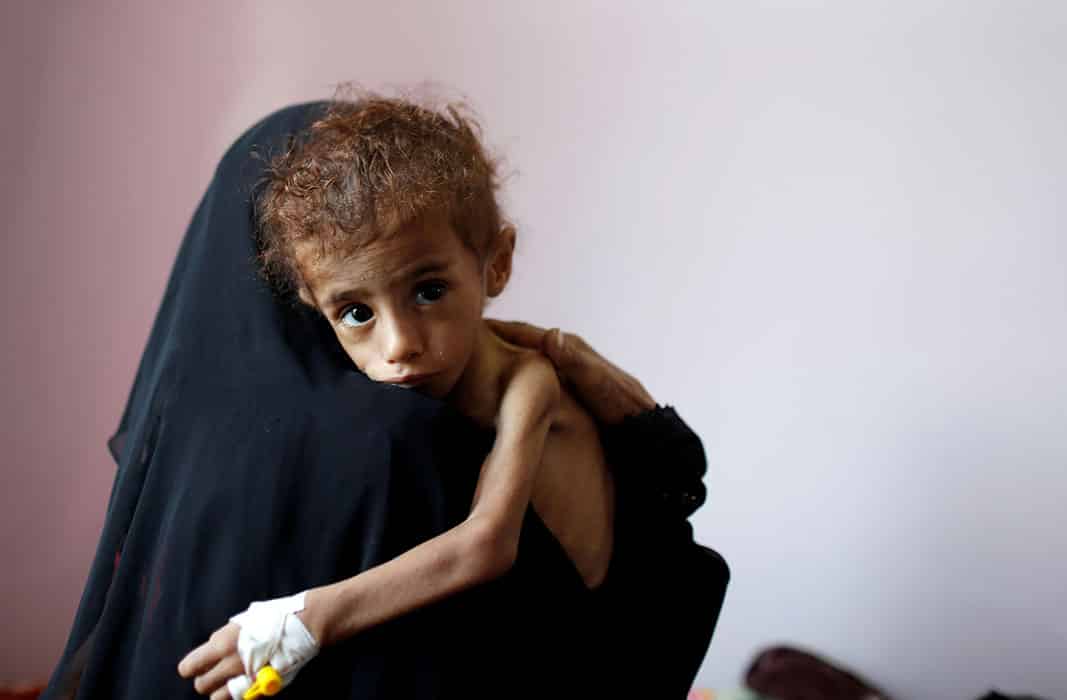 Aid agencies and Catholic officials are sounding the alarm on Yemen’s spiralling humanitarian crisis, calling on the combatants to end the war and make badly needed assistance available.

Yemen is facing the largest humanitarian crisis of this time, according to the United Nations. The impoverished nation at the tip of the Arabian Peninsula is now the most food-insecure population in the world due to the 4-year-old conflict.

“A war is ongoing in Yemen, but the big world does not seem to be very interested,” said Bishop Paul Hinder, apostolic vicar of Southern Arabia, which includes Yemen.

“There are innumerable people internally displaced because they fled from the war,” he told Catholic News Service.

“A wonderful nation with a cultural tradition (spanning millennia) is about to be destroyed,” warned Bishop Hinder, decrying the lack of international resolve to end the conflict tearing Yemen apart.

Observers say Yemen has been caught up in a proxy war between Saudi Arabia and its regional archrival, Iran. More than 10,000 people have been killed, millions have been displaced and it has pushed Yemen to the verge of starvation.

Nearly 21 million people in Yemen need humanitarian aid; two-thirds of the population is on the brink of starvation, without access to adequate food and clean water to survive each day.

Some 1.8 million Yemeni children are malnourished, making them more vulnerable to disease, the UN children’s agency, UNICEF, reported. These children include nearly 400,000 whose lives are at risk from severe acute malnutrition. Some 68 percent of the population lacks access to basic health care.

Meanwhile, Yemen’s cholera outbreak — the worst in the world — is accelerating again, with roughly 10,000 suspected cases now reported per week, according to the World Health Organization. Approximately 30 per cent of all suspected cases are children under age 5, the agency added, saying that cholera can kill a child within hours, if left untreated.

“The international community cannot ignore anymore the tragedy going on. The warring parties have to be pressured in order to sit around the table and to make humanitarian help possible for all people in need,” said Bishop Hinder.

“The conspiratorial silence around this war has to be broken in order to force the warring parties to a cease-fire followed by serious peace talks,” Bishop Hinder said. Aid “must not be stopped by the war parties under whatever pretext.”

In June, escalating violence in and around Yemen’s port city of Hodeidah, the main humanitarian hub, led to hundreds of thousands more people being displaced and vital routes for aid and supplies being closed. Recently, there has been an increase again in airstrikes on Hodeidah, jeopardizing the lives of noncombatants.

“It’s almost impossible to speak on the phone with my sister in Yemen because the constant bombing makes our conversations impossible,” a Yemeni refugee named Habiba, who sheltering in Amman, told CNS.

“Humanitarian corridors are urgently needed and have to be secured. Attacks against health care institutions, schools and social events, such as weddings and funerals, have to be (condemned) by the international community,” Bishop Hinder told CNS.

Ahead of World Refugee Day in June, Pope Francis urged the international community to make every effort to end the severe humanitarian situation in Yemen.

The United Nations has renewed its efforts to try to end Yemen’s war with a plan that calls on the Iranian-backed Houthi rebels and the internationally recognised government of President Abed Rabbo Mansour Hadi, supported by Saudi Arabia and the United Arab Emirates, to agree a peace deal under a transitional governing body.

“With the humanitarian crisis (in Yemen) plummeting to new depths, all efforts must be focused on securing a cease-fire,” said Frank McManus, the New York-based International Rescue Committee’s country director in Yemen.