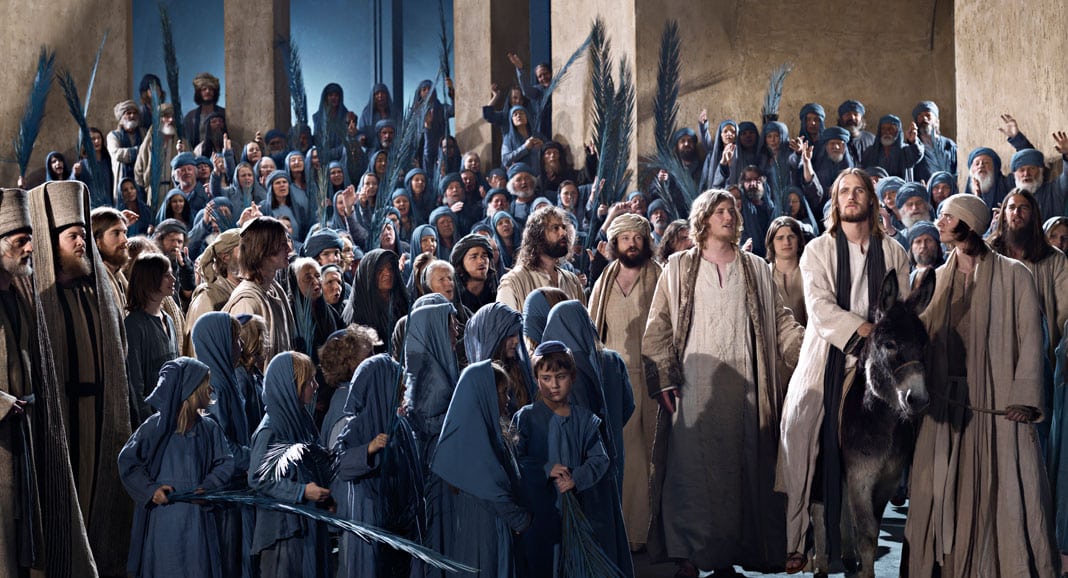 Frederik Mayet says playing the role of Jesus in the world’s most famous passion play has changed his life forever.

“It’s so different when you have to play the role on stage. I got really close to the ideas of Jesus and what he wanted… but it’s so hard to live in your daily life,” he told The Catholic Weekly.

“He expects so much from us… if everyone would live it, the world would be so much better.”

The 39-year-old actor and devout Catholic is set to play the role of Christ for the second time in the Bavarian village of Oberammergau in 2020.

He was recently in Sydney to promote the famous play staged every 10 years and depicting Christ’s passion, death and resurrection.

The last time it was performed in 2010, it attracted a staggering 500,000 people from around the world.

The cast alone consists of 1800 adults and 550 children. Only those born in Oberammergau, or those who have lived there for at least 20 years, are permitted to take part.

“In the biggest scene we have about 900 people on stage, when Pilate presents Jesus to the crowd,” he said.

During the crucifixion scene, when Mr Mayet is required to be on the cross for an arduous 20 minutes, the audience of 5,000 is so quiet he said that you could “hear a pin drop”.

“The audience is very focused and it’s a very special moment,” he said. “You get a feeling how it was 2,000 years ago … how brutal it was.”

The other powerful scene is when Christ drives the merchants out of the temple and the Shema Yisrael—Hear O Israel—prayer is sung.

“He brings prayer back to the temple and it is very emotional.”

The Oberammergau Passion Play was first performed in 1634 after the people of the village, situated in the picturesque Barvarian Alps in south-east Germany, made a pact with God.

“The Passion Play is one of the oldest and largest passion plays in the world. It started 400 years ago during the 30 Years War when the Swedish troops came into Bavaria, in the region of Oberammergau, and they brought the Plague with them,” Frederik said.

“There was one guy working in a neighbouring village and he came over the mountains and brought the disease into the village.

“Within a few weeks half the population of Oberammergau died.

“In those days nobody knew what was happening. They thought it was a punishment of God and so they said, ‘If God takes the disease away, we will play the Passion Play every ten years’. History says, from that day nobody else died [from the Plague].”

The people of Oberammergau kept their end of the bargain and have faithfully performed the play every 10 years.

Thomas Cooke, the inventor of tourism, organised the first tours to Oberammergau in 1880.

It went on to become the largest, and oldest, passion play in the world.

Frederik’s debut was as the apostle John in 2000 when he was 20 years old.

When he was selected to play Christ as a 30-year-old in 2010 he says his life was never the same.

“Everything changed from that day … the day after the announcement, everyone knows you, everyone is looking at you.

“I felt so much pressure because the focus is so much on you … how do I play this role?”

With a population of only 5200, about half the village takes part in every performance.

Rehearsals begin six months ahead of the opening night and about two months out most of the male cast members are not allowed to have haircuts or shave their beards.

The production includes an orchestra of 65 musicians and a choir of 90.

Frederik said that during his 2010 performances, it was the Agony in the Garden scene that was the most difficult to play.

“The hardest scene to play was the prayer on the Mount of Olives when the disciples fell asleep … In that moment he could have disappeared and said, ‘No, I will go back to Galilee and stop it here.’

He also has fears and he’s crying and shouting to his father. But then he says, ‘No, I have to go my way even it ends on the cross … I felt very close [to him] because he has fears and weak moments but then he focuses again on what he’s about.”

The 2020 Oberammergau Passion Play will be performed from May to October next year.

For more info on tours to Oberammergau: www.gocollette.com/passionplay